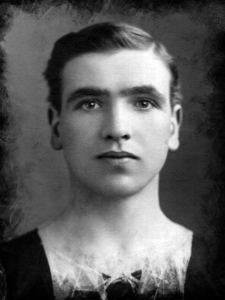 John Barr Murray Fleming (1890-1916) was born in Slamannan, Stirlingshire in 1890 and died near Richmond, Yorkshire on 21 March 1916. The son of a mining contractor, Fleming began his career in Scottish football before moving south of the border for spells at Newcastle United and Tottenham Hotspur. After joining the British Army during World War One, Fleming would die at a military camp in 1916 following a bout of pneumonia.

Fleming began his football career at Musselburgh Union before enjoying spells at Armadale Thistle, Bonnybrigg Rose Athletic and St Bernard’s. He then signed for English club Newcastle United in April 1911, who paid £250 for his services. Despite netting four goals during a pre-season tour match against German side Koln, Fleming struggled to establish himself at St James’ Park and left one year later after just four competitive appearances.

Fleming then joined Tottenham Hotspur for a fee of £300, making his debut on 18 October 1913 in a 3-1 defeat at Burnley. After making a further seven appearances before the turn of the year, Fleming was struck by injury and had to wait until 5 September 1914 for his next match in a Spurs shirt. He would eventually play 11 times for Tottenham during the 1914/15 season before returning to Scotland to play four games for Glasgow Rangers. He then enlisted in the British Army.