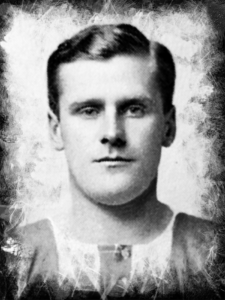 Julius Reginald Gregory (1881-1916) was born in Romiley, Stockport in 1881 and died on 20 July 1916 in northern France. A versatile but often controversial full-back, Gregory found himself in trouble with the football authorities on more than one occasion during a career that saw him play for Brighton and Hove Albion, Manchester City, Luton Town and Bury. Soon after the outbreak of the First World, Gregory joined the British Army and would subsequently lose his life during the Battle of the Somme.

A former Manchester Grammar School pupil, Gregory began his football career at local side Unsworth before joining first division Bury in 1902. After establishing himself as a reserve team regular, Gregory was handed his senior debut on 26 December 1903 in a goalless draw with Wolverhampton Wanderers at Gigg Lane. Over the next two seasons, Gregory would make a total of 14 appearances for Bury and was a a regular fixture in the club’s second string.

In May 1905, Gregory took the decision to leave Gigg Lane to sign for Manchester City, where he made his debut in a 2-0 defeat at Preston North End on 7 October 1905. He would subsequently struggle to establish himself at Hyde Road, however, and after playing just two further matches, Gregory left at the end of the 1905/06 campaign to join Brighton and Hove Albion. After making his debut against Leyton on 1 September 1906, Gregory soon established himself as first-choice fullback at the Goldstone Ground, however, he would also attract some negativity following a number of disciplinary problems on the pitch.

In November 1906, he was heavily-sanctioned by the Football Association after charging an opponent with ‘under violence’ during a match at Northampton Town. The incident would spark disorder among the home support and led to a review into safety procedures.  Gregory was then banned for a second time less than 12 months later, when he was found guilty of misconduct following a tempestuous 3-2 defeat at Southampton.

Despite these disciplinary problems, Gregory enjoyed a largely productive two-season stay at Brighton and had played a total of 64 games in the Southern League by the time he left the club to join Luton Town at the end of the 1907/08 campaign. Gregory would then go on to make a further 26 league appearances in one season at Kenilworth Road before finally calling time on his playing career.

Private PS/4904 Gregory joined the 20th (Service) Battalion (3rd Public Schools) of the Royal Fusiliers (City of London Regiment) in late 1914 and underwent initial training near Leatherhead. After joining 98th Brigade, 33rd Division at Clipstone Camp, Mansfield, the battalion moved to Tidworth in August 1915 before landing in France three months later. They were then then transferred to 19th Brigade and later spent time in the Givenchy sector before moving to the Somme on 10 July 1916.

On 20 July 1916, the battalion took part in the attack on High Wood and suffered significant losses during fierce hand-to-hand fighting. Going into action in the early hours, the Fusiliers helped clear the south-eastern area of the wood but had sustained 390 casualties by the time they were withdrawn from the frontline at midnight. Among those killed during the attack was Julius Gregory whose name is now among more than 72,000 listed on the Memorial to the Missing of the Somme at Thiepval.