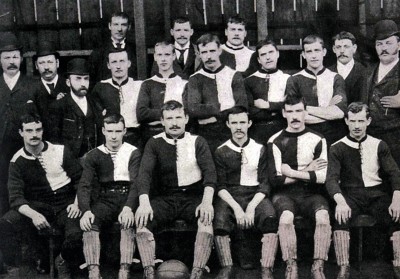 Manchester United Football Club were formed as Newton Heath FYR FC in 1878 by workers from the Carriage and Wagon department of the Lancashire and Yorkshire Railway depot, then situated in Newton Heath, Manchester.

The newly-formed club initially played games against other departments of the L&YR, however by 1888 they had become one of the founding members of the Combination league - a tournament run for clubs across the Midlands and Northern England who were not members of the Football League, which was also established that year.

The Combination launched its inaugural season in the autumn of 1888, however it was soon beset by a series of financial problems an in April 1889, before the conclusion of the season, the decision was taken to disband it. The failure of the Combination was greeted with disappointment by those involved, however the experience would soon help lay the foundations for the growth of English football.

By now convinced of the merits of organised competition, Newton Heath made an unsuccessful application to join the Football League, before eventually taking their place in the newly-formed Football Alliance. Two years later, they would be joined in the competition by local rivals Ardwick AFC, soon to become Manchester City.

The club made three further applications to the join Football League before it was decided, in 1892, that the two competitions would merge to create a larger First Division and a new Football League Second Division. While the majority of Alliance clubs found themselves in the second tier, Newton Heath (having now dropped the FYR suffix) were elected to the 16-team First Division alongside Nottingham Forest and Sheffield side, The Wednesday.

One year later, the club vacated its North Road home and moved to the Bradford and Clayton Athletic Ground located on Bank Street, Clayton. They would stay there for the next two decades, before moving again in 1910.

Despite early anticipation, Newton Heath's introduction to life in the top flight proved difficult and they were relegated to the Second Division after just two seasons. Worse was to follow however, as the club lurched towards financial ruin. In 1902, they were served a winding-up order with debts in excess of £2,600.

With Newton Heath on the brink of collapse, team captain Harry Stafford found four local businessmen each willing to invest £500 in return for direct involvement in the running of club affairs. A deal was subsequently struck and on 24 April 1902, newly installed president John Henry Davies announced the club would go forward carrying a new name - Manchester United FC. 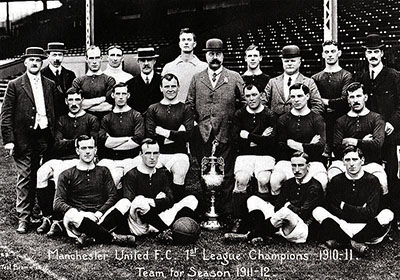 Under its new owners and the shrewd stewardship of manager Ernest Mangnall, United began a remarkable rise that took them from the lower reaches of the Second Division, to the 1907/08 Football League First Division title. Integral to this success were former Manchester City stalwarts Billy Meredith, Sandy Turnbull, Herbert Burgess and Jimmy Bannister.

Suspended and forced to leave City following the 1905 match-fixing scandal and it's subsequent fallout, the four players were persuaded to join United by the enigmatic Mangnall and soon established themselves as firm crowd favourites at Clayton.

Furthermore, Meredith and Turnbull, alongside United captain Charlie Roberts, would also play a crucial role in the creation and fight for survival of what is now the Professional Footballers' Association, the Association of Football Players' and Trainers' Union (AFPTU).

Threatened with suspension by the FA if they did not revoke their AFPTU membership, the United "rebels" refused all attempts to subjugate them and the union eventually survived. It was to be one of the most important periods in the history of the English game.

On the pitch, United continued their rise and they won their first ever FA Cup in 1909 when Sandy Turnbull scored the only goal against Bristol City at Crystal Palace, London. Under Mangnall, United had established themselves as one of the very best sides in the country and in 1910, the ambitious club moved to a new purpose-built stadium located just outside the city boundaries in Old Trafford.

United's success continued and in 1911, they won their second league title in three years after edging out Aston Villa on the final day of the season. Four months later United won yet another piece of silverware, this time Charity Shield after a remarkable 8-4 victory over Swindon Town at Stamford Bridge, however it would prove to be their last trophy under Mangnall. In 1912, the United boss left Old Trafford to take the manager's job at Manchester City.

Mangnall's exit brought a close to Manchester United's first great period of success, and the club soon began a steady decline that would see them slump to 18th place by the end of the 1914/15 Football League First Division season. United would fair little better after the First World War and supporters had to wait another forty years before the league title would return to Old Trafford.