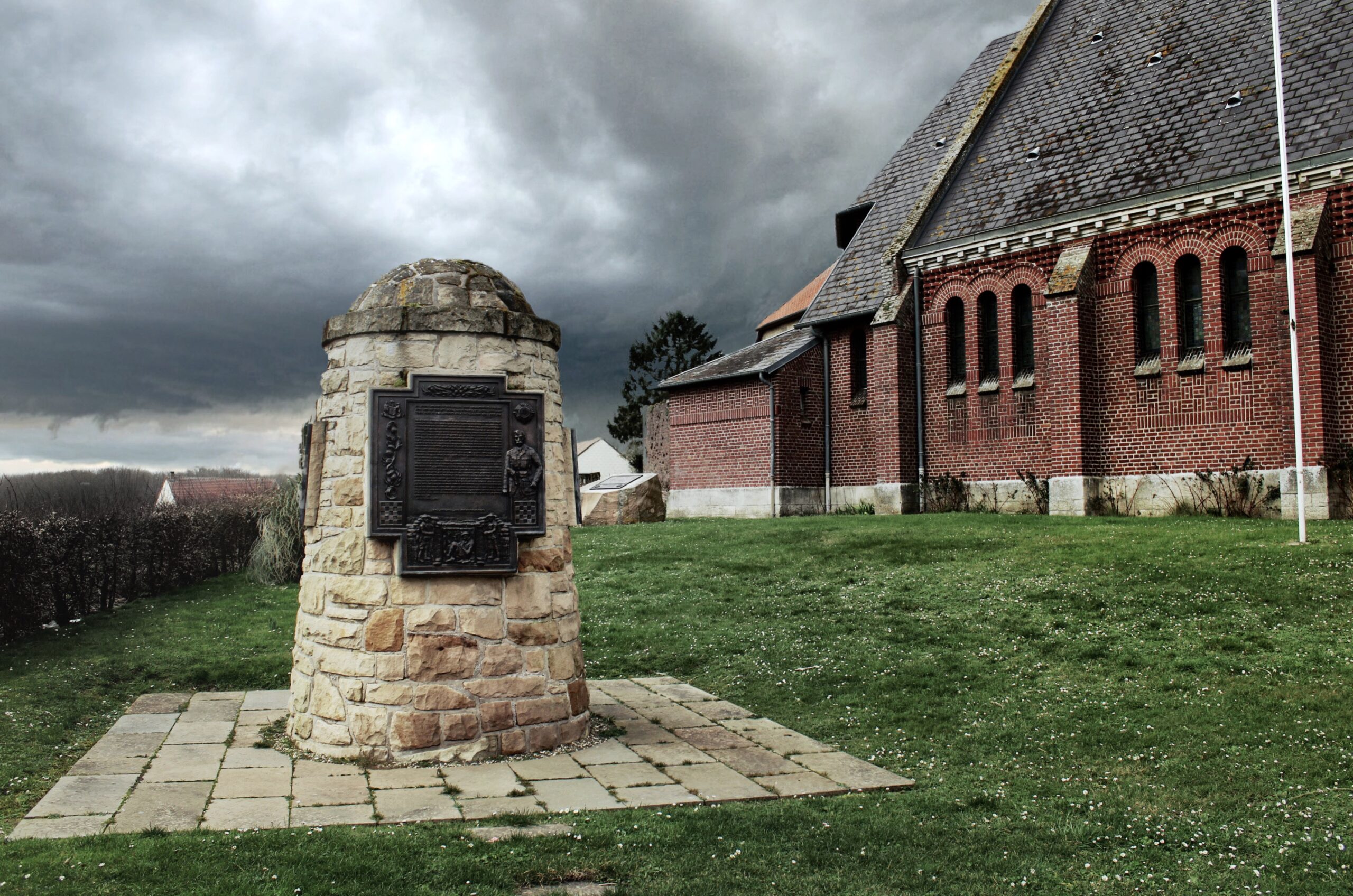 The memorial cairn to the 16th Battalion of the Royal Scots, better known as “McCrae’s Battalion”, is located in the French village of Contalmaison and was officially unveiled on 7 November 2004 in a ceremony attended by more than 700 people.

The idea of a memorial to the men of the 16th Royal Scots was first proposed by D.M. Sutherland in April 1919, when the ‘s surviving officers met for a reunion dinner in the Scottish capital. Despite repeated appeals for financial assistance from the City of Edinburgh Corporation however, plans to formally recognise the sacrifice of the on the Somme were to be frustrated.

In 1922, it was instead agreed to commemorate the 16th Royal Scots on a plaque in Edinburgh’s St Gile’s Cathedral. The same year, Heart of Midlothian Football Club, who had seen their entire side join McCrae’s en masse, also funded the construction of a memorial to remember the sacrifice of their players and supporters during the war. The ceremony to unveil the memorial clock tower at Haymarket was attended by more than 35,000 people and ground Edinburgh to a standstill.

In 2003, following the publication of Jack Alexander’s book, McCrae’s Battalion: The story of the 16th Royal Scots, it was decided to resurrect the original plan to commemorate the losses of the 16th Royal Scots during the Battle of the Somme and D.M. Sutherland’s early design was subsequently chosen as the most fitting tribute.

Land was gifted next the the village church by the mayor of Contalmaison, Bernard Sénéchal, and the memorial cairn was finally unveiled on 7 November 2004 after a fundraising campaign that involved support from the City of Edinburgh, the Scottish Executive, the Royal Scots, Heart of Midlothian Football Club and many others. This financial assistance was matched by football fans from a number of Scottish clubs, including supporters of Hearts, Hibernian, Raith Rovers and Falkirk.

The cairn features four plaques, with its main relief incorporating the cap badge of the Royal Scots, the coat of arms of Edinburgh, the emblem of the 34th Division, a cartoon by D.M. Sutherland, and finally, an image of Sir George McCrae himself. The first supporting plaque is dedicated to Heart of Midlothian, while the second is in memory of the 16th Royal Scots’ sister , the 15th Royal Scots. Finally there is an expression of gratitude to the local French population on its reverse.

The 16th (Service) Battalion (2nd Edinburgh) of the Royal Scots was raised in Edinburgh in November 1914 by Lieutenant-Colonel Sir George McCrae, a respected Liberal Member of Parliament for East Edinburgh and a volunteer soldier.

While the featured a strong contingent of volunteers from Heart of Midlothian Football Club, there were also professionals from clubs such as Falkirk, Hibernian, Raith Rovers, Dunfermline, East Fife and St Bernard’s. In total, it is believed around 75 football clubs provided volunteers.

The arrived in France in January 1916 and attacked La Boisselle on the first day of the Battle of the Somme. Despite heavy resistance, small parties of men from McCrae’s Battalion were to push deep into German lines to reach the fortified village of Contalmaison, the furthest advance of any unit on that front.

Forced to withdraw soon after however, the majority of them were never seen again and the eventually lost 12 officers and 573 men. Among the dead of 1 July 1916 were three Hearts players; Duncan Currie, Harry Wattie and Ernie Ellis. A fourth, Jimmy Boyd, would be dead within four weeks.

The 16th Royal Scots would later see action at the Battles of Arras and Third Ypres in 1917, and were to suffer heavy casualties during the German Spring Offensive of 1918. On 14 August 1918, McCrae’s Battalion were disbanded in France.

**To read more about the 16th Royal Scots and the construction of the memorial at Contalmaison, visit McCrae’s Battalion Trust 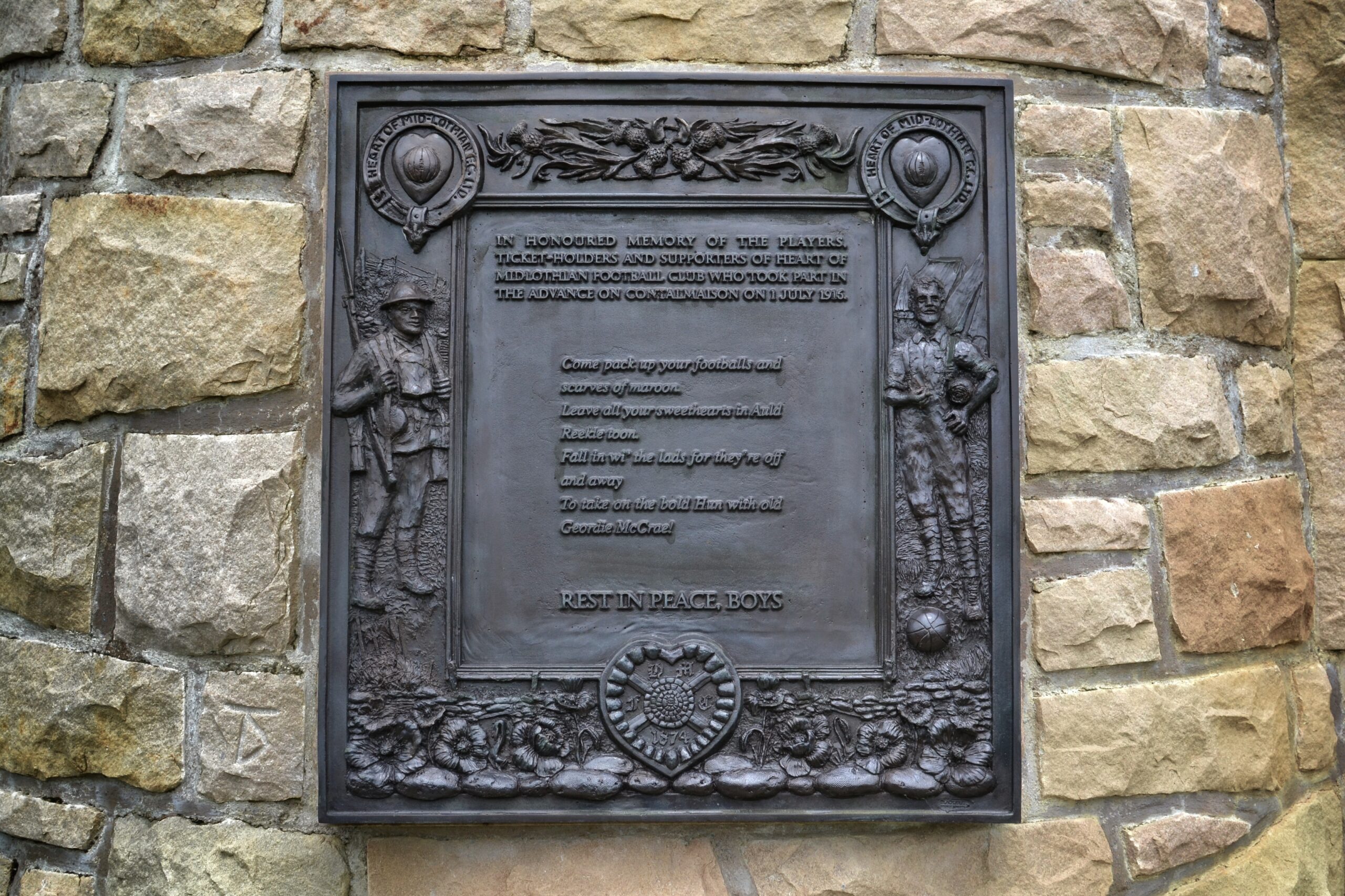