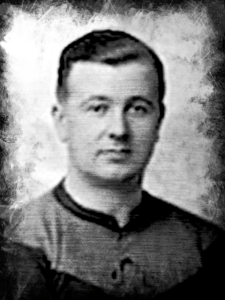 Oscar Fox (1889-1947) was born in Sheffield, Yorkshire in 1889 and died there in October 1947. Bradford City’s leading goalscorer in the three seasons prior to the First World War, Fox was part of a devastating partnership with Dickie Bond. Having served in the British Army during the war, Fox returned to Valley Parade and his football career after the armistice.

Fox joined Bradford City in November 1910 from Castleford Town and made his debut against Oldham Athletic on 18 February 1911. In the following five seasons the inside-forward scored 42 times in 113 games for the club, in turn becoming a firm fan favourite. During the First World War, Fox continued to play for City in wartime competition and also appeared as a ‘guest’ for Newcastle United while based in the north-east.

Following the armistice, Fox returned to Valley Parade and would play a further 51 league and three FA Cup games, scoring 16 goals. By the time Fox left the club in 1921, he had struck 58 times in 176 appearances in all competitions. His final game was a benefit match against Middlesbrough which made him £540. In retirement, Fox worked in a Billiard Hall in Sheffield and died in October 19147, aged 54. His son, also Oscar, played nearly 300 games for Sheffield Wednesday and Mansfield Town.

Private 20/184 Fox enlisted in the West Yorkshire Regiment on 10 December 1915 and was posted to the 20th (Reserve) Battalion at Clipstone Camp, near Mansfield. Having then risen to the rank of corporal with 2/5th Battalion, Fox was discharged from the Army for unknown reasons on 25 July 1918.