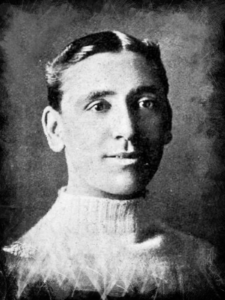 John Thomas “Pat” Flanagan (1889-1917) was born in Aston, Birmingham in 1889 and died on active service in East Africa on 31 August 1917. Known as Pat, the inside-forward played more than one hundred games for Arsenal before the World War One, during which he served in the British Army and would later lose his life.

Pat Flanagan began his career playing youth football at local club Stourbridge before moving to East Anglia in 1908 for a brief spell at Southern League side Norwich City. Twelve months later, Flanagan signed for Fulham and made his debut in 1-0 home loss to Blackpool on 13 September. He would then go on to make six further appearances, scoring one goal, as the Cottagers finished 7th in the Second Division.

The 1910/11 campaign saw Flanagan play just four times before he was persuaded to make the short move to Plumstead to join Arsenal, who had just been taken over by Fulham owner Henry Norris. Flanagan made his Arsenal debut on 4 February 1911 in a 1-0 FA Cup defeat to Swindon Town, before going on to play nine further games for the club that season. He would also score his first goal for the Gunners during a 3-0 win over Bristol City at the Manor Ground on 25 March 1911.

Flanagan would consolidate his position as a first team regular the following season, eventually scoring seven times in 33 games, before Arsenal were to suffer the ignominy of relegation in 1912/13. A lacklustre season saw the gunners finish bottom of the league with Flanagan also enduring a difficult and injury-hit campaign. An immediate return to the top flight was then missed by the tightest of margins in 1913/14, as Flanagan struck 12 goals in 24 matches to help Arsenal finish third behind champions Notts County and second-placed Bradford Park Avenue.

Flanagan would play his last official match for Arsenal during the 1914/15 season, when they fell to a 3-0 loss at Preston North End on 17 April 1915. He would end the campaign having scored six goals in 26 games as Arsenal finished fifth. Soon after, Flanagan began work at the Royal Arsenal in Woolwich but would also play a number of wartime games for Arsenal in the London Combination.

Flanagan enlisted in the British Army under Lord Derby’s Group Derby scheme at Woolwich on 8 December 1915, before returning to his reserved employment as an artillery shell machinist. Driver M/288065 Flanagan was then mobilised into the Army Service Corps (ASC) on 7 February 1917 and underwent transport training at the ASC Depot at Grove Park in South-East London, before being posted to 816th M.T. Company. He was then sent to German East Africa (now Tanzania).

In August 1917, Flanagan reported sick with dysentery and was taken to the 52nd (Lowland) Casualty Clearing Station at Mingoyo. He would then have been sent to No. 3 East African Stationary Hospital which was located in Dar es Salaam. Flanagan’s surviving medical and service records record that his condition deteriorated rapidly before he could be moved to the main hospital and he died at 52nd CCS on 31 August 1917.

Flanagan is now buried at the Dar Es Salaam War Cemetery, which was created in 1968 after graves from a number of different areas were moved to ensure future maintenance.