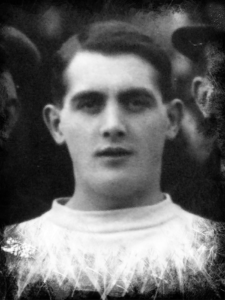 Patrick “Paddy” McGuire (1889-1916) was born in Manchester in 1889 and died near the French village of Flers on 12 October 1916. A talented and hard-working full-back, McGuire joined Manchester City from local side Hurst in 1912 after a brief amateur spell in the reserve team at Manchester United. Following three seasons at Hyde Road, McGuire enlisted in the Manchester Regiment during the First World War and was later killed in action during the Battle of the Somme.

Patrick McGuire began his football education at Corpus Christi School in Miles Platting before moving on to Woodhouses School. He later joined Manchester League side Hurst FC, now known as Ashton United, where he was part of the side that lost a title play-off decider in 1909/10 after finishing joint top with Salford United. McGuire’s form soon attracted the attention of  Manchester United, who eventually gave the building site labourer an opportunity to turn out for the club as an amateur.

After registering with United on 6 January 1911, McGuire is reported to have played in a reserve team encounter with Colne soon after. [Information provided by Mark Wylie, museum curator at Manchester United FC. The Athletic News states McGuire had a “two months’ trial with Manchester United in their last season at Clayton, but… was not offered an engagement.”] Despite then being registered with United for the 1911/12 campaign, it seems likely that he returned to former club Hurst that season to help them lift their first Manchester League crown.

Following the conclusion of the 1911/12 season, the 22-year-old was on the move again, this time to Manchester City who had just finished in a disappointing 15th position after winning just one of their opening 13 matches of the season. McGuire signed professional terms with the blues in August 1912 and would soon establish himself as a regular in the reserve team at Hyde Road.

Used mainly as cover for first-choice full-backs Eli Fletcher and Billy Henry, McGuire was finally handed his Football League debut on 1 March 1913 when City lost 2-1 to Chelsea at Stamford Bridge. He then went on to make five further appearances during the 1912/13 campaign as the blues finished in sixth spot.  The following season began well for McGuire and he played five games before the end of the year. Opportunities were limited in the second half of the season, however, and he made just one further appearance  – a 1-0 loss against Everton at Goodison Park.

The 1914/15 season was to again prove one of frustration for McGuire as he found first-team football severely restricted. Confined to the second-string, McGuire’s first senior appearance of the season did not come until 28 November when City travelled to West Bromwich Albion and came away with a 1-0 victory. The full-back was handed another run-out two weeks later, when City lost 4-1 at Everton, before playing what would prove to be a final competitive first-team game on 19 December 1914 in a 3-2 home defeat to Bradford Park Avenue. He would subsequently turn out for the reserves for the remainder of the season.

McGuire joined the British Army following the culmination of the 1914/15 campaign and was posted to Cleethorpes where he agreed to play for Grimsby Town. Soon becoming a regular fixture in the first-team at Blundell Park, McGuire would make a total of  31 wartime appearances during the 1915/16 season, scoring six goals. His impressive form would earn numerous plaudits, with The Athletic News claiming McGuire “played better football than at any period of his career, and Grimsby regarded him as the best defender who had worn their livery for a decade.” They added the full-back was “clear-headed, resourceful, and a master of defensive tactics.”

Private 24744 McGuire joined the Manchester Regiment in May 1915 and was posted to 3rd (Reserve) Battalion at Cleethorpes for training. During his time on Humberside, McGuire was appointed lance-corporal before being posted to 17th (Service) Battalion of the Manchester Regiment (2nd City) sometime in mid-1916. The battalion had been in France since November 1915 and had concentrated in the area between Maricourt and Suzanne with 30th Division in the months leading up to the Battle of the Somme.

The 17th Manchesters were part of the successfully divisional attack on Montauban on 1 July 1916, the opening day of the offensive, but had suffered significant casualties by the time they were relieved during the early hours of 3 July. The battalion would then take part in heavy fighting at both Trones Wood and Guillement before they were withdrawn for a period of rest and reorganisation. They then moved to the Bethune sector before returning to the Somme to take part an assault on a system of trenches near the village of Flers on 12 October 1916.

The attack was a costly failure for the Manchesters as they suffered heavy losses from enemy machine-gun and artillery fire. By nightfall the battalion recorded casualties of 213, including 50 killed. Among the dead was 28-year-old L/Cpl McGuire who was initially recorded missing. News of McGuire’s death soon reached Britain, where The Athletic News reported on Monday 30 October 1916:

It was with very deep regret that news was received at Grimsby on Saturday of the death in action in France of Lance-Corporal P. M’Guire [sic], of the Manchester Regiment, the brilliant young full-back of the Manchester City club, who played for Grimsby Town throughout last season. Last winter he played better football than at any period of his career, and Grimsby regarded him as the best defender who had worn their livery for a decade. He was clear-headed, resourceful, and a master of defensive tactics. Now he has given his life in the greatest of all causes. That something had befallen him had been feared for three weeks past, as Mr. Hickson did not receive any acknowledgement of the letters and parcels of comfort which he and his wife make a practice of dispatching regularly to the “boys” at the front. On Saturday came the sad official news that M’Guire [sic] was no more.

Readers of the Lincolnshire Echo and the Manchester Evening News were also notified of McGuire’s death in the days that followed, however, soon after the latter published a story that, incorrectly as it would prove, suggesting McGuire may still be alive. Unfortunately, this was not uncommon in the confusion that often followed a soldier’s death during a major action. This was especially true when there was no identified body. Published on 8 November, the Manchester Evening News wrote:

It has, perhaps, been too readily assumed that Private McGuire, the Manchester City back, has been killed. It is true that his wife, who lives in Manchester, received news from a soldier that her husband was missing, but an inquiry from the Records Office at Preston elicited the information that as far as they knew McGuire was still serving with his corps.

It is unclear where this information came from but further reference to it has yet to be found. McGuire’s death was referred to in a number of newspaper articles over the coming months, including the Lincolnshire Echo, who wrote on 18 February 1918: “The Town team is scarcely recognisable in these days. That stalwart back, Sid Wheelhouse… has made the great sacrifice; so has the other fullback McGuire.”  After the war, McGuire’s widow is also believed to have received a number of payments from the Football Association’s National War Fund.

Patrick McGuire has no known grave and his name is listed among the 72,194 on the Memorial to the Missing of the Somme at Thiepval. He is also commemorated on the war memorial at St Chad’s Church in Cheetham Hill, Manchester.

*There has been some confusion surrounding a number of newspaper reports that refer to McGuire as a lance-Corporal, including frequent match reports from his time playing wartime football for Grimsby Town. Official records of McGuire’s death, including those from the Commonwealth War Graves Commission and the War Office-produced Soldiers Died in the Great War, record him as a private. This anomaly arises from to the fact that lance-corporal was not an actual rank in the British Army during the First World War (and not until 1961) but an appointment given to privates who were acting in the role of a Non-Commissioned Officer (NCO). It was an appointment that could be taken away at anytime by the man’s Commanding Officer (CO), whereas a full corporal could only be demoted by court-martial. McGuire, therefore, held the rank of private but the appointment of lance-corporal.

Additional information provided by Mark Wylie at Manchester United Football Club.
A full list of sources used to create this page can be found here.