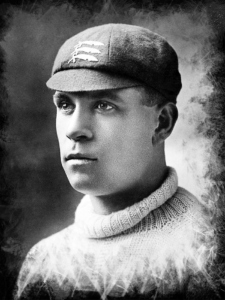 Elias Henry “Patsy” Hendren (1889-1962) was born in Turnham Green, Middlesex on 5 February 1889 and died in Tooting Bec, London on 4 October 1962. A Wisden Cricketer of the Year and one of the most prolific batsmen of his generation, Hendren was also a gifted footballer who played for a number of clubs before serving in the British Army during the First World War. The most productive period of Hendren’s football career would then come after the Armistice, when he played more than 150 games for Brentford.

Hendren began his career playing local junior football and soon proved as adept with a ball at his feet as he was with a cricket bat in his hand. After brief spells as a teenager at both Queens Park Rangers and Brentford during the 1907/08 season, Hendren moved north to join Manchester City in March 1908 and made his reserve team debut soon after.

Hendren was handed his senior debut at City in a 2-1 home win over Nottingham Forest on 13 April and would then play in a 3-1 home loss to Sheffield United one week later. The match would prove to be his last for Harry Newbould’s side and in October 1909, Hendren left Manchester to join Coventry City.

Hendren would soon establish himself at Highfield Road and scored 13 goals in 29 league and cup games during his first season in the Midlands. His second proved far less productive, however, as Hendren struggled with a number of injuries that limited him to just four appearances. At the end of the 1910/11 campaign, Hendren left Coventry and returned to former club Brentford, where he would impress enough to earn a place in the Southern League representative side that took on a Football League XI during the 1913/14 campaign.

The First World War would then put a temporary hold on Hendren’s career, however, he continued to play both football and cricket after enlisting and was part of strong 23rd Royal Fusiliers sides. After the armistice, he returned to Griffin Park and would go on to enjoy the best period of his entire career. Over the next eight seasons, Hendren would play more than 150 times for the Bees and also represent England in the unofficial Victory international loss against Wales in 1919. He finally brought an end to his football long career in 1927, aged 38.

Hendren made his first class debut in 1907 and would eventually play 833 county matches for Middlesex, scoring what remains the third highest run aggregate of 57,611 runs at an average of 50.80. His total of 170 centuries also ranks him second on the all-time scoring list.  After being named Wisden Cricketer of the Year in 1920, Hendren toured Australia with England in 1920/21 and made 28 and 56 on his test debut at Sydney. He would subsequently go on to play a total of 51 tests for his country, scoring 3,525 runs at an average of 47.63.

Hendren is also credited with wearing the first safety helmet in cricket, taking to the field with a rubber hat with three peaks in a test against the West Indies at Lords in 1933. From a sporting family, Hendren’s older brother Denis also played nine first-class games for Middlesex.

Private SPTS/1213 Hendren joined the 23rd (Service) Battalion of the Royal Fusiliers (1st Sportman’s) in December 1914 and underwent training in Hornchurch, Essex. In July 1915, the battalion moved to Clipstone Camp in Nottinghamshire where it joined 99th Brigade, 33rd Division. They then moved to Salisbury Plain and undertook final training before deployment overseas.

The battalion finally left Britain in November 1915, however, Hendren would remain on home service and was posted to the reserve depot at Leamington Spa in Warwickshire. Over the next three years, he played for his team in a number of fundraising matches and also turned out for Brentford in the unofficial London Combination wartime tournament. He was finally discharged from the Army following the Armistice and resumed both his football and cricket careers.