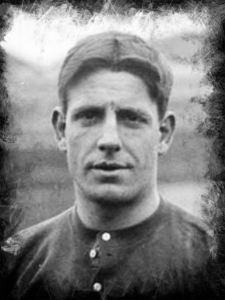 Percy Robert Sands (1881-1965) was born in December 1881 in Norwood, Surrey and died on 28 December 1965. A vastly-experienced centre-half, Sands played 350 games in 12 seasons at Arsenal and also worked as a school-teacher. During the First World War Sands served overseas with the British Army before joining Southend United following the Armistice.

Sands began his career at Cheltenham Town, where he was undertaking teacher-training, before joining Arsenal as an amateur in 1902. Handed his debut on 5 September 1903 in a 3-0 home win over Blackpool, Sands would go on to play 34 games in his first full season at the Manor Ground. Having spent the following two years as an amateur, Sands finally signed professional terms with Arsenal ahead of the 1906/07 campaign and would play a further 228 matches for the club over the next nine seasons.

Sands played his final game for the Gunners on 24 April 1915, a 7-0 home thumping of Nottingham Forest, after which official competition was suspended for the duration of the First World War. In all he had played 350 times for Arsenal, a record that was to stand for the next fifteen years. After serving overseas with the British Army, Sands returned to football in 1919 and signed for Southern League side Southend United. He finally retired from the game soon after and eventually died in 1965.

Private 545970 Sands enlisted in the Royal Army Medical Corps (RAMC) in 1915 and underwent training in Aldershot, Hampshire. He would subsequently rise through the ranks and served in France and Flanders before spending 18 months on the Italian Front. Following the armistice, Staff Sergeant 545970 Sands was transferred to the Army Reserve before finally being demobilised in late 1919.