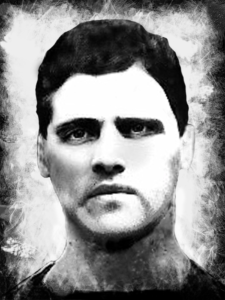 Peter Gartland (1893-1973) was born in Seaham, County Durham on 14 May 1893 and died in Manchester in June 1973. A full-back by choice, Gartland played just one game for Manchester City before competitive football was suspend for the duration of the First World War in 1915.

Gartland joined Manchester City as a 20-year-old from Seaham Harbour in March 1914, initially brought in by manager Ernest Mangnall as cover for first choice left-back Eli Fletcher. He was then forced to wait until Boxing Day 1914 to make his City debut, deputising for Fletcher in a 2-1 win over Chelsea at Hyde Road. The match proved to be Gartland’s sole senior appearance for the club, although he would make 32 wartime appearances during the First World War.

Gunner 244618 Gartland served in the Royal Field Artillery (RFA) during the First World War, during which time he made 32 wartime appearances for City – 23 in the Principal Tournament of the Football League Lancashire Section and nine in its Subsidiary. He would play his final game for City in a 1-0 loss at Bolton Wanderers on 16 February 1918 during a period of home leave from the Army.

On 21 September 1918, the Manchester Evening News reported that Gartland had been admitted to an Australian base hosptil in France, where it was feared he would have to have his leg amputated after suffering shrapnel wounds during a German bombardment. The operation was subsequently carried out and the official match programme for City’s game against Liverpool on 16 November 1918, five days after the armistice, featured a letter from Gartland recounting the incident. It read:

Just a few lines hoping to find you and the Directors and all the boys in the best of health. I am pulling myself together now. I was very unlucky to lose my leg, as my wound was just the size of a threepenny piece, and I sat down and bandaged myself up and I was in hospital within two hours of being hit. I was not in hospital for more than ten minutes before they had my leg off, as it happened to be a gas shell and the gas was working right up my leg. But I am doing fine now, and am sorry to say I have finished with the game my heart and soul were in. Remember me to the boys. I would like to see them at the top this season. So now I must close, wishing you all the best of luck. I remain yours sincerely, Peter Gartland.

Gartland would subsequently return to Manchester after being discharged from the Army but would obviously play no further part in professional football. On Saturday 11 February 1922, Manchester City reserves took on Burnley’s second string in a match that was used to raise money for their former half-back. Gartland was invited to kick-off the match, played at City’s Hyde Road ground, and would eventually see £296 8s 8d taken in gate receipts and £19 11s 8 1/2d raised from collections in and around the ground.