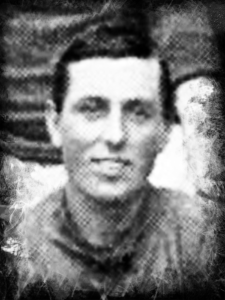 Ralph Holden (1886-1939) was born in Liverpool in September 1886 and died there on 19 September 1939. A diminutive half-back who spent much of his career playing reserve team football, Holden made two senior appearances for Liverpool before moving to Tranmere Rovers just before the First World War. Holden would later join the British Army and lost a leg serving as a machine-gunner on the Western Front.

Holden began his football career at Lancashire Combination side St Helens Recreation before moving to Liverpool in December 1910. Despite featuring in the second string at Anfield, Holden was forced to wait more than two years for his first senior opportunity, making his debut in a 4-1 loss at Manchester City on 18 January 1913.

Playing time remained difficult to come by for Holden and his next first team appearance, a 0-0 home draw with West Bromwich Albion on 27 September 1913, proved to be his last his last for Liverpool. In June 1914, Holden left Anfield and made the short journey across the River Mersey to sign for Tranmere Rovers, who had just won their first Lancashire Combination title.

Holden would go on to captain Rovers and continued to turn out for them following the outbreak of war, while also working as a labourer at the local docks. After joining the British Army and subsequently serving overseas, Holden returned to Merseyside after the Armistice but was unable to resume his football career having lost a leg. On 3 May 1919, a testimonial match was played for Holden at Prenton Park, which saw Tranmere beat Liverpool 2-0 in front of more than 5,000 spectators.

Holden enlisted under the Derby Scheme on 10 December 1915 in Bootle, Merseyside and was subsequently transferred to the Army Reserve. He was then mobilised on 29 November 1916 and posted to the Machine Gun Corps (MGC) on 1 December 1916. Later posted to 235th Machine Gun Company, Private 85939 Holden was appointed lance corporal on 12 July 1917 and was then promoted to the rank of corporal on 26 February 1918 when 12th Machine Gun Battalion was formed from the MG coys of 12th (Eastern) Division.

The battalion were involved in heavy fighting during the German advance across the old Somme battlefields and fought in the Battle of Amiens in August 1918. Further actions at Meaulte, Mametz, Carnoy, Hardecourt and Faviere Wood followed, before they took part in the Battle of Epehy on 18 September. On 24 September, Holden was badly wounded in the face, arm and leg and was evacuated to 1st London General Hospital at Camberwell. He would subsequently lose his right leg after it was amputated at the thigh and was finally discharged on 15 August 1919.