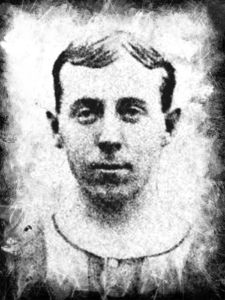 Robert Suart (1882-1918) was born in Stockport in October 1888 and died near the French city of Arras on 27 September 1918. An experienced wing-half, Suart played more than 200 games in the Football League and was a hugely popular figure among fans of every club he turned out for. During the First World War, Suart enlisted in the British Army and would subsequently lose his life just five weeks before its end.

Suart began his career at local amateur side Edgeley FC before signing for Second Division Stockport County in September 1903. After making his first team debut in a 4-1 home loss to Gainsborough Trinity on 3 October 1903, Suart finished the 1903/04 season with six appearances under his belt as County finished 16th and were relegated.

Following one season in the Lancashire Combination, Suart would establish himself as a first-team stalwart and was an ever-present during the 1905/06 campaign as County came tenth in the Second Division. Over the next two seasons, the wing-half would play a further 65 league and two FA Cup games before eventually leaving Edgeley Park in April 1908 after Fulham had paid £550 for Suart and teammate Bob Carter.

Handed his Fulham debut in a 2-1 home win over Wolverhampton Wanderers on 1 April 1908, Suart would go on to make 102 appearances in all competitions – becoming a hugely popular figure in the process. After playing his final game for the club in a 2-1 win at Blackpool on 22 April 1912, Suart signed for  Burslem Port Vale. After playing a further 175 games for Vale, Suart’s career was finally brought to an end by the First World War in 1915.

Private 40332 Suart initially enlisted in the 8th South Lancashire Regiment in 1915 before transferring to 14th Royal Warwickshire Regiment (Service No. 29593) later that year. The battalion landed at the French port of Boulogne on 21 November 1915 and came under orders of 13th Brigade, 5th Division soon after. Having initially been in reserve during the opening phase of the Battle of the Somme, the battalion were to take part in heavy fighting at High Wood, Guillemont, Flers-Courcelette, Morval and Le Transloy before eventually leaving the sector in October. In 1917 they saw action during the Battle of Arras and Third Ypres. They were then transferred to the Italian Front but returned to France in April 1918.

At 0520 on 27 September 1918, the 14th Warwicks took part in an assault on positions near the village of Gouzeaucourt called African Trench. Having initially gained a foothold in their objective, they were soon bombed out of it by determined German counter-attacks and suffered significant casualties. Among the dead was 36-year-old Bob Suart whose name is now among over 9,000 listed on the Vis-en-Artois Memorial, located 10 kilometres south-east of Arras.