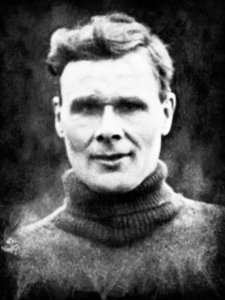 Samuel Hardy (1882-1966) was born in Newbold, Derbyshire on 26 August 1882 and died in Chesterfield on 24 October 1966. An vastly-experienced England international goalkeeper, Hardy played more than 600 games during a career that spanned more than two decades. During the First World War, Hardy served in the Royal Navy.

Hardy began his career at local club Newbold White Star before moving to Chesterfield in 1902. After making 77 appearances in three seasons at Saltergate, Hardy left in 1905 when Liverpool paid £500 to secure his services. Handed his debut in a 4-1 home win over Nottingham Forest on 21 October, he would go on to play 219 times for the Merseysiders and won the league title in his first season at the club. He would also make his England debut during his time at Anfield, keeping a clean-sheet in a 1-0 win over Ireland on 14 October 1907. In all,  he would eventually win 21 caps for his country.

In 1912, Hardy moved to Aston Villa where he would soon establish himself as first-choice goalkeeper. He would subsequently play 183 games for the club either side of the First World War, during which he also played as a wartime guest for Plymouth Argyle and Nottingham Forest. Hardy won the FA Cup twice with Villa, in 1913 and 1920, before finally leaving to join Forest in 1921.

In four-seasons at The City Ground, Hardy would play a further 109 games and win the Second Division title in 1921/22. After finally retiring from football in 1925, Hardy worked as a publican until his death on 24 October 1966, aged 84.

Ordinary Seaman L9639 Hardy joined the Royal Navy on 30 October 1916 and was subsequently posted to HM Naval Base Devonport in Plymouth for training. On 28 July 1917, Hardy was appointed to the “A” Class destroyer HMS Opossum, which would serve in home waters for the duration of the war. Four months later,  Hardy escaped injury when the Opossum’s bridge was badly damaged by enemy fire in the English Channel. On 1 March 1918, he returned to HMNB Devonport where he would remain until 8 May 1918 when he was discharged.