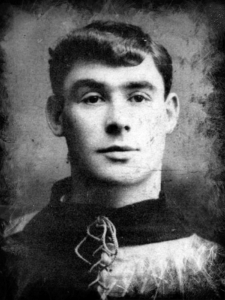 Sidney Wheelhouse (1888-1916) was born in Bishop Auckland, County Durham in July 1888 and died in France on 19 September 1916. An experienced full-back and captain, Wheelhouse spent seven season at Grimsby Town before the First World War, during which he enlisted in the Footballers’ Battalion and would later lose his life.

Wheelhouse began his career at amateur side Bishop Auckland before moving to Shildon Athletic in 1906. Having established himself as a first team regular, Wheelhouse soon began to attract the attention of a number of professional clubs and in the summer of 1907, he reportedly rejected a move to Sunderland in order to sign for second division side Grimsby Town.

After making his debut in a 4-1 home loss to Gainsborough Trinity on 3 September 1907, Wheelhouse went on to play 35 times in all competitions during his first season at Blundell Park. It was an impressive start to life in the Football League and one that was to continue in the seasons that followed, as Wheelhouse went on to captain Grimsby.  In his final season at the club, the popular full-back played 23 times before taking part in the 3-0 loss at Birmingham on 10 April 1915. The match would prove to be his last as a professional footballer. In total, Wheelhouse had played 234 Football League and 10 FA Cup games during his seven seasons at the club, scoring on three occasions.

Private F/909 Wheelhouse enlisted in the 17th (Service) Battalion of the Middlesex Regiment, better known as the 1st Footballer’s Battalion, on 24 February 1915. He was then among the players who were permitted to return to their clubs at weekends to fulfil the remainder of the 1914/15 season fixtures. Wheelhouse subsequently spent time at Cranleigh in Surrey and Clipstone Camp near Mansfield, before moving to Perham Down in August 1915 where his battalion prepared for its eventual deployment overseas. On 2 October 1916, Wheelhouse played for the 17th Middlesex football team in a 1-0 victory over Cardiff City at Ninian Park.

The battalion landed at the French port of Boulogne on 17 November 1915 and would experienced its first taste of life in the trenches near the mining town of Loos. Within weeks of arriving in France, Wheelhouse played for the battalion side in a divisional football tournament, which they would eventually win after beating 34th Brigade, Royal Field Artillery 11-0 at Hersin on 11 April 1916.

Soon after, Wheelhouse returned home for a short period of leave, during which he played one final time for Grimsby Town in a charity match at Blundell Park on 6 May 1916. The game was staged to raise funds for the victims of the Zeppelin Raid on Cleethorpes on 1 April, which included 31 soldier of the Manchester Regiment who had been killed when their billets at the Alexandra Road Baptist Chapel had been destroyed.

Having subsequently returned to his battalion, Pte Wheelhouse was involved in heavy fighting at Delville Wood between 27 and 29 July 1916,  during which time the 17th Middlesex sustained significant casualties. On 3 August, Wheelhouse was appointed lance corporal before taking part in further heavy fighting near the village of Guillemont five days later.

On 18 September 1916, Wheelhouse was a part of work party that had been shoring up a collapsed trench parapet throughout the previous night. Soon after, the men came under heavy enemy mortar fire and were taking cover in the nearby Gray Sap when the Germans blew a mine under their positions. Caught unprepared, the men were overcome by poisonous gas and were subsequently evacuated to the rear. Despite reports suggesting that Wheelhouse had walked unaided to the first aid station, within 24 hours the entire working party was dead. Wheelhouse was 27-years-old and left a widow, Agnes, and three children. Following his death, L/Cpl Wheelhouse was buried at Couin Military Cemetery, which is located 15 kilometres east of Doullens.