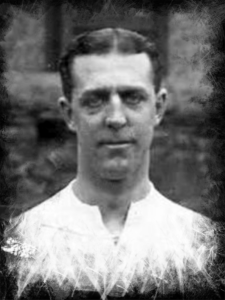 Spencer Thomas Bassett (1885-1917) was born in Blackheath, Kent on 23 July 1885 and died in northern France on 11 April 1917. An intelligent footballer of fine physique, Bassett spent time at Arsenal before enjoying the best period of his career at Southern League sides, Swansea Town and Southend United. During the First World War, Bassett joined the British Army and would ultimately lose his life on the Western Front aged 32.

Bassett began his career at South Eastern League side Maidstone United, where he would spend two seasons before moving to Arsenal in 1906. Despite turning professional in May 1907, Bassett found opportunities difficult to come by and would play just one game before leaving the club to join Exeter City in 1910.

Bassett’s time at St. James’ Park was to prove far more productive and he would spend three successful seasons playing at centre-half for the Devon club. In 1913, Bassett left Exeter and signed for Southern League outfit, Swansea Town, where he was handed his debut against Caerphilly soon after. After playing a total of 32 games in all competitions, Bassett left Swans to join Southend United, where was an an established member of the starting XI until official competition was suspended for the duration of the war in May 1915.

Gunner 70384 Bassett enlisted in the Royal Garrison Artillery (RGA) at Woolwich on 10 December 1915, before being posted to No 1 Depot RGA. Following a brief period at 18 Company RGA, he was posted to 140th Siege Battery, RGA on 30 May 1916 as they prepared for deployment overseas. He left Southampton with his unit on 1 August 1916 and disembarked at the French port of Le Havre the next day. The Battery then joined 15th Heavy Artillery Group (HAG) on 7 August 1916 before moving to 36th HAG on 10 September 1916.  On 27 December 1916, Bassett was appointed acting-bombardier.

By April 1917, the battery had been transferred to 14 HAG and was attached to I ANZAC Corps, Fifth Army. Having advanced towards the Hindenburg Line, 14 HAG were then to provide heavy artillery support for the attack on the village of Bullecourt on 11 April 1917. It was during this action that Bassett was wounded by German counter-battery fire. After being evacuated to the rear, the 32-year-old would succumb to his injuries and was subsequently buried at Pozieres British Cemetery.