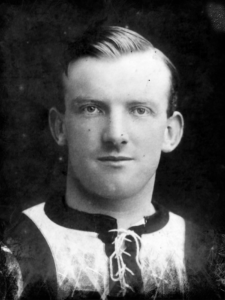 Edward Stanley Dixon (1894-1979) was born in Choppington, Northumberland on 26 May 1894 and died in Bedlington on 13 August 1979. A versatile forward who could operate in a number of positions, Dixon played almost 200 games in a career that spanned more than 16 years. Having served in the British Army during the First World War, Dixon later returned to professional football and would not retire until 1930.

Dixon began his career at local amateur side Barrington Albion, where a string of impressive performances prompted Newcastle United to pay £5 for his services in February 1914. Having made his debut in a 2-1 home defeat to Liverpool on 1 April 1914, Dixon would find opportunities limited at St James’ Park and played just one more game before competition was suspended for the duration of the war at the end of the 1914/15 season.

Having returned to the club following the armistice, Dixon scored six times in 23 games during the 1919/20 season as United finished in eighth in the English top flight. Despite the promising start to his post-war career however, Dixon soon found playing time restricted and would play just 28 more games before leaving to join Blackburn Rovers in March 1923.

His time at Ewood Park would prove similarly inconsistent and he would notch up just 31 appearances during his three and a half year stay in Lancashire. In May 1926, Hull City persuaded Dixon to move to Humberside, where he would enjoy the most productive spell of his career.

Having made his debut in a 1-0 home win against Wolves on 28 August 1926, Dixon would eventually play 99 league and eight FA Cup games for Hull, scoring a total of three goals. Dixon would play his final game for the club, again against Wolves, on 3 May 1930, after which he enjoyed brief spells at amateur sides East Riding Amateurs and Choppington Rovers. After retiring from the game, Stan Dixon worked as a cinema manager in Hull before returning to the North-East. He died in 1979 aged 85.

Sapper 969 (later 465524) Dixon enlisted in the Tyne Electrical Engineers, a pre-war territorial unit of the Royal Corps of Engineers (RE), on 28 April 1915 at Clifford’s Fort, North Shields. After spending time at both No. 1 and No. 3 Anti-Aircraft Company RE, Spr Dixon was posted to 34 AA Company on 29 July 1916. He was then appointed lance corporal on 30 September 1916, before being appointed acting corporal on 3 July 1917.

On 5 November 1918, Dixon was posted to No.1 AA Company RE, located at Gosport, on 5 November 1918 and appointed acting sergeant. Dixon was finally demobilised at North Camp, Ripon on 29 August 1919, having spent his entire wartime service on anti-aircraft duty in the United Kingdom.