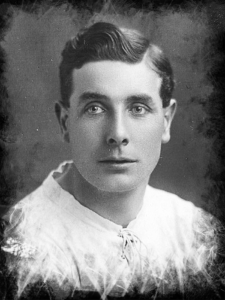 Terence Percival Hanney (1889-1964) was born on 19 January 1889 in Reading, Berkshire and died there on 30 November 1964. The youngest of three children born to John Hanney, a regular soldier in the Royal Berkshire Regiment, and his wife Henrietta, Hanney spent his early years at Reading’s Brock Barracks before moving to the Duke Of Yorks Royal Military Asylum in Chelsea aged 11 for his education. He then enlisted in his father’s regiment as a boy solider and would go on to serve eight years before leaving the Army in 1911.

Hanney’s subsequent career as a professional footballer saw him play more than 150 games for Reading, Manchester City and Coventry City and he was part of the gold medal-winning Great Britain team in the 1912 Olympic football competition in Stockholm.

During the First World War, Hanney rose to the rank of sergeant in the Footballers’ Battalion and was wounded on the Western Front before resuming his career following the armistice. After finally retiring as a player in 1922, Hanney spent time in Germany as coach of both VfB Stuttgart and FC Wacker München before eventually returning to England to work as a publican. He eventually died on 30 November 1964 aged 75-years-old.

Hanney enlisted as a 14-year-old boy soldier in 1st Battalion of the Royal Berkshire Regiment on 28 February 1903 and was appointed drummer on 1 October 1903. Drummer 7110 Hanney was posted to the ranks on attaining the age of 18 years on 28 January 1907 and was appointed unpaid lance corporal on 15 August 1907. Subsequently appointed paid lance corporal on 18 October 1907, Hanney was promoted to full corporal on 3 September 1908 and held that rank until he was discharged at his own request on 31 August 1911.

A tall and graceful centre-half, Hanney’s talents on the football field first came to prominence during his time as a regular soldier and he eventually took the decision to leave the Army in 1911 to pursue a career in the game. After subsequently establishing himself as an integral part of the starting XI at hometown club Reading, then in the Southern League, Hanney won two amateur caps for England and was also part of the Great Britain squad that won the gold medal at the 1912 Olympic Hames in Stockholm, Sweden.

In 1913, Hanney signed professional terms at Elm Park but was sold to Manchester City soon after for a fee of £1250, a substantial amount of money at that time. He had to wait until 29 November 1913 to make his debut for his new club, however, Hanney would go on to play 24 league and six FA Cup games that season as City finished in 13th position in the First Division.

The 1914/15 campaign would prove to be the most productive of Hanney’s three (official) seasons at Hyde Road, as the 25-year-old played 41 games in all competitions for Ernest Mangnall’s side. Hanney would then play as a wartime “guest” for the club before returning to play in the opening seven games of the 1919/20 season – the first official campaign following the end of the First World War.

Hanney subsequently struggled to overcome injuries that had been sustained during the war and played his final game for City in a 3-3 home draw against neighbours United on 11 October 1919. Despite his physical difficulties, Hanney continued his football career and spent two seasons at Coventry City before returning to Reading in 1921 to play a remarkable 42 games (as captain) in the final season of his playing career.

After retirement, Hanney travelled to Germany to take up coaching roles at VfB Stuttgart, who he lead to the Württemberg-Baden regional championship in 1927, and FC Wacker München, where he also found some success. Hanney returned to Reading before the Second World War, during which he ran coaching sessions at his former club, and lived there until his death in 1964.

Private F/1613 Hanney enlisted in the 17th (Service) Battalion of the Middlesex Regiment, better known as the 1st Footballers’ Battalion, on 1 June 1915. Hanney then moved with his battalion to Clipstone Camp in Nottinghamshire in July 1915, where it joined 33rd Division. One month later, the 17th Middlesex moved south to Perham Down near Salisbury Plain to begin their final training before embarking to France.

On 23 October 1915, Hanney played in a charity football match for old club, Reading, against his  team at Elm Park. The match finished in a 3-2 victory for the Southern League side, with Hanney scoring Reading’s second goal. The 17th Middlesex then embarked for France on 17 November where they subsequently moved to positions around the mining town of Loos.

In December 1915, the battalion left 33rd Division to join 2nd Division. The battalion played no part in the opening phase of the Battle of the Somme, however, they where to suffer significant casualties during heavy fighting at Delville Wood between 27 and 29 July 1916. It was during this action that Ted Hanney, having now risen to the rank of sergeant, was wounded in the face, shoulder and right thigh, later writing:

I was hit on the night of the 28th of July about 10.30pm, but did not leave the trenches until the next morning about 8.30. The Germans counter-attacked that night three times, and as I felt quite all right I stopped and gave them a few extra rounds of ammunition…By gum, I saw some sight there! I shall never forget them.

Hanney was admitted to 2/2 (London) Casualty Clearing Station (also known as No. 55 CCS) on 30 July 1916 before he was returned to England and admitted to 5th Southern General Hospital, Portsmouth on 6 August. After undergoing surgery to remove shrapnel from his face, he was discharged from hospital on 12 September and was sent to the Eastern Command Depot at Shoreham in Decmember.

On 4 January 1917, Hanney was posted the 5th (Reserve) Battalion of the Middlesex Regiment at Chatham, Kent where he remained for the duration of the war. He was finally discharged from the British Army on 25 March 1919 and transferred to Class “Z” Army Reserve. During active service, he had suffered facial scarring, damage to the right shoulder and, most significantly for his footballing career, a torn adductor muscle in his right leg.