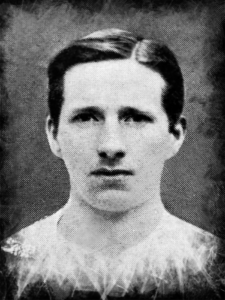 Thomas Barber (1888-1925) was born on 20 February 1888 in West Stanley and died in Nuneaton on 18 September 1925. An intelligent and enterprising half-back, Barber spent most of his career at Bolton Wanderers and Aston Villa before the First World War, during which he served in the Footballers’ Battalion. Barber was forced to retire due to ill-health in 1925 and died soon after aged just 36.

Barber began his career at local sides Shankhouse, West Stanley and Hamsterley before moving to Bolton Wanderers in 1907. Handed his debut on 17 October 1908, Barber would eventually play a total of 107 games for the Trotters before moving to Aston Villa in December 1912. He soon became a regular starter at Villa Park and went on to play 68 times for the club, bagging 10 goals. In 1913, Barber scored the winning goal in the FA Cup Final triumph over Sunderland at Crystal Palace, before playing his last official game for Villa in a 3-0 loss at Newcastle United on 28 April 1915.

Barber played for a number of clubs during the First World War, including Partick Thistle, Crystal Palace and Glasgow Celtic, and would also represent England in the Haig Hospital Fund International against Scotland at Celtic Park on 8 June 1918.

Following the Armistice, Barber had brief spells at Merthyr Town, Ton Pentre, Pontypridd and Walsall. In 1918 he also turned out for both Belfast Celtic and Linfield – a rare occurrence as the clubs were bitter rivals at a time of political unrest in Ireland. Barber would suffer recurring ill-health after the war and spent significant time in hospital. He was struck down with tuberculosis in 1925, which would eventually prove fatal. He died in Nuneaton on 18 September 1925 aged just 36.

Private F/852 Barber joined the 17th (Service) Battalion of the Middlesex Regiment in February 1915 and was among those players permitted to return to their clubs at weekends to fulfil the remainder of the 1914/15 season fixtures. After spending time at Cranleigh in Surrey and Clipstone Camp near Mansfield, Barber moved to Perham Down with his battalion in August 1915 where they prepared for deployment overseas. The 17th Middlesex subsequently landed at the French port of Boulogne on 17 November 1915 and would experience its first taste of life in the trenches near the mining town of Loos.

The 17th Middlesex would then see action at Delville Wood and Waterlot Farm during the Somme offensive in the summer of 1916, when Barber sustained leg wounds and was evacuated to Britain. After undergoing treatment at a hospital in Aberdeen, Barber was transferred to the Labour Corps (311143) before undertaking munition work in Glasgow.