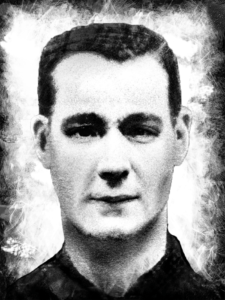 Thomas Farrell (1886-1916) was born in Earlestown, Lancashire in 1886 and died in northern France on 1 July 1916. A talented inside-forward, Farrell played three senior matches for Manchester City before a two-season spell in Scottish football with Airdrieonians. During the First World War, Farrell joined the British Army and was killed in action on the opening day of the Battle of the Somme.

Following a brief period on the books at Woolwich Arsenal, Farrell joined Manchester City in September 1905 and would soon established himself as a reserve team regular at Hyde Road. After impressing in the City second string, Farrell was finally handed his senior debut on 5 January 1907, when the Blues lost 1-0 to The Wednesday at Hyde Road. He then played in a 1-1 home draw with Newcastle United on 16 February 1907 before making his third, and final, appearances for the club on 20 April 1907 in a 4-0 loss at Blackburn Rovers.

With playing opportunities limited under Tom Maley, Farrell took the decision to leave City at the end of the 1906/07 season and move north to join Scottish side, Airdrieonians. During two seasons at Broomfield Park, Farrell would play 15 games and score one goal. He subsequently returned to the north-west of England, where he finished his career at local amateur side, Eccles Borough, in the years leading up to the First World War.

Private 9018 Farrell joined the Lancashire Fusiliers soon after the outbreak of war and underwent training with the 3rd (Reserve) Battalion near Hull. After being posted to the 1st Battalion, who had been in Gallipoli since landing at “W” Beach on 25 April 1915, Farrell sailed for the peninsula and joined his new unit on 18 July 1915.

The battalion were subsequently evacuated from Gallipoli on 2 January 1916 and spent two months in Egypt before sailing for France with the rest of 29th Division.  After landing at Marseille on 29 March 1916, the division moved north and would soon begin preparations for their involvement in the British offensive on the Somme.

On 1 July 1916, the 1st Lancashire Fusiliers were tasked with attacking the heavily-fortified village of Beaumont Hamel. A and D Companies had moved into a sunken lane in no-man’s land prior to the attack, while B and C companies were to attack from their own frontline, which lay approximately 100 yards to the rear. The men in the sunken lane were supported by four Stokes mortars and two machine guns, however, they came under heavy enemy fire and suffered significant casualties before zero hour, which was 0730.

Ten minutes prior to the assault, a huge mine was blown under Hawthorn Ridge, which lay approximately 200 yards form the battalion’s positions in no-man’s land. Despite causing substantial damage to the immediate German positions, the explosion had the unfortunate effect of alerting the enemy to the men situated in the sunken lane.

When the Fusiliers finally advanced at zero hour, they came under heavy and sustained machine gun fire from both Hawthorn Ridge, and positions immediately to their front and left flank. Of the men who occupied the sunken lane, only a handful were to get close to the uncut enemy wire, where they were repulsed with devastating casualties.

The attack was a bloody failure and had cost the Fusiliers dear. Of the officers and men that had gone into battle, 163 had been killed and 312 wounded.  Eleven men were also missing. Among the fallen was the-now Corporal Farrell, who was 29-years-old at the time of his death.

Many of the dead would remain in no-man’s land until Beaumont Hamel was finally captured in November 1916, more than four months after it was originally intended to fall. Following his death, Farrell was buried at Auchonvillers Military Cemetery, which now contains 528 burials. He left a widow, Frances, and three children.