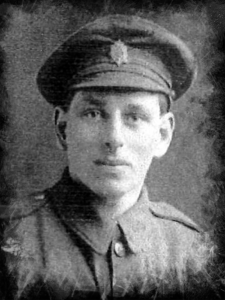 Thomas Leslie Evans (1890-1945) was born in Chester in 1890 and died on 23 October 1945 in Leeds. A gifted goalkeeper, Evans played 74 games for Stockport County before joining the British Army during the First World War. After re-enlisting during the Second World War, Evans served on the Home Front before dying suddenly in hospital aged 55.

After moving to the Isle of Man as a child, Evans developed into a talented all-round sportsman and would soon impress playing as a goalkeeper for Ramsay Football Club. In 1912 Evans left the island and moved to Merseyside, where he played two games as an amateur for Everton reserves. Despite failing to secure a contract at Goodison Park, Evans was invited to play in a charity match for Stockport County in February 1913 and would impress sufficiently to earn a full-time move to the Second Division side.

Handed his senior debut in a 2-1 home win over Leeds City on 13 September 1913, Evans would go on to play a further 36 games during the 1913/14 season as County finished 12th. Now firmly established as the club’s first-choice goalkeeper, Evans would make another 36 league and one FA Cup appearances during the 1914/15 campaign before official competition was suspended for the duration of the First World War.

During hostilities, Evans would feature in a number of unofficial wartime matches for County, including a friendly against Everton during a period of leave, but would make no further competitive appearances for the club. He played his final game for the Hatters on 15 March 1919 against Burnley.

After returning to the Isle of Man, Evans established a short-lived business and later worked for the Manx Publicity Board. During the Second World War, he was commissioned as a lieutenant in the King’s Regiment but would remain in Britain until being demobilised after aggravating an old hip injury. In October 1945, Evans underwent an operation on the damaged hip at the Ministry of Pensions Hospital in Leeds but would suffer post-operation complications and died suddenly on 23 October 1945. He was just 55-years-old.

Private M2104482 Evans joined the Army Service Corps (ASC) in early 1915 and was posted to the ASC Mechanical Transport (MT) Depot for training. He would subsequently arrive in France on 9 September 1915 and went on to serve as a motorcycle dispatch rider during the Somme offensive in 1916. Soon after, Evans sent a letter back to the Isle of Man which was subsequently published in the Ramsey Courier, it read: “So far I like army life but shan’t [sic] be sorry when it is all over and I can get back to ‘footer’ again. I will close as I have got a chance to get some sleep which I badly want as I have not had any for two nights.”

Evans would return to Britain on leave in late December 1916 and turned out for Stockport County in a 5-2 defeat to Everton on News Year’s Day 1917. He would then play a further game 12 months later, when County beat Rochdale 5-2 on Christmas Day 1917. Evans was finally demobilised on 18 February 1919 and was transferred to Class “Z” Army Reserve.