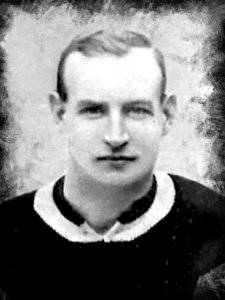 Thomas Weston (1890–1952) was born in Halesowen on 2 August 1890 and died in Stourbridge in 1958. A dashing and tough-tackling defender, Weston was first-choice left-back at Aston Villa for more than a decade and won two FA Cups with the club. During the First World War, Weston served in the British Army before returning to football after the armistice.

Weston started out at local team Quarry Bank before spending time at Old Hill Comrades, Coombs Wood and Stourbridge. In July 1911, Weston joined Aston Villa and made his debut in a 3-1 home win against Manchester City on 20 January 1912.

Weston would soon establish himself at Villa Park and was a key member of the side that finished second in two successive seasons and won the 1913 FA Cup. By the time official competition was suspended at the end of the 1914/15 season, Weston had played a total of 98 games.

During the First World War, Weston made six appearances for Villa and also turned out for neighbours, Birmingham. He then returned to Villa Park after the armistice and won a second FA Cup winners’ medal in 1920 after Villa beat Huddersfield Town 1-0. Weston would eventually make 179 appearances for Villa before joining newly-promoted Stoke in August 1922. He would struggled to settle in Staffordshire, however, and would eventually retire from the game after just four further appearances.

The following comes from the Villa News and Record 1919: “A private in the Army, joining up in 1917. He took part in the action on the St Quentin front, which lasted from 21st to the 26th March 1918, and was wounded in the attack on Ervilliers on the 26th of that month. Weston has also done work on guns.”