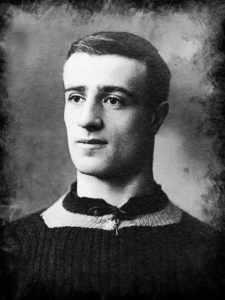 Walter Kimberley (1886-1917) was born in Aston, Birmingham on 1 May 1886 and died there on 22 April 1917. A uncompromising and energetic full-back, Kimberley was a pre-war regular soldier who played for Aston Villa, Coventry City and Walsall before serving in France with the British Expeditionary Force during the early months of the First World War. After spending two years in a prisoner of war camp in Germany, Kimberley was repatriated in 1916 but died from tuberculosis just months after he was discharged from the Army.

Kimberley joined Aston Villa from amateur side Aston Manor in 1906 and was handed his debut in a 1-0 win at Arsenal on 8 February 1908. He would subsequently struggle to establish himself at Villa Park, however, and joined Coventry City in 1912 after just six further appearances. During his time at Highfield Road, Kimberley would find playing time easier to come by and by the time he left in 1914, he had played 23 matches in all competitions. A brief spell at Walsall followed before Kimberley’s career was finally ended by the First World War.

Private 5465 Kimberley was a pre-war regular soldier who enlisted in the Coldstream Guards on 5 March 1904. Mobilized at the outbreak of the First World War, Kimberley was posted to 1st Battalion and appointed lance corporal on 6 August 1914. The battalion were amongst the first troops of the British Expeditionary Force to land in France and were involved in heavy fighting during The Battle of Mons, The Battle of the Marne, The Battle of the Aisne and the First Battle of Ypres. Kimberley was subsequently captured by the enemy and sent to a prisoner of war (PoW) camp in Germany.

Kimberley was repatriated in August 1916 as part of a prisoner exchange, however, his health had deteriorated significantly in the two years he had spent in captivity. A subsequent medical report revealed that Kimberley had contracted severe tonsillitis, laryngitis and bronchitis during his time in Germany, a devastating combination that resulted in Kimberley permanently losing his voice. Furthermore, Kimberley was also suffering from pulmonary tuberculosis.

Admitted to Queen Alexandra’s Military Hospital, Millbank, on his return to Britain, Kimberley was discharged from the Army as “No Longer Physically Fit for War Service” on 1 September 1916 and returned to his family home in Birmingham. A subsequent Medical Board report issued on 9 January 1917 recorded Kimberley’s condition as “Total Incapacity”, indicating the severity of his failing health. Three months later, on 22 April 1917, Walter Kimberley died from TB at his home on Clifton Road, Aston and was buried at Birmingham (Witton) Cemetery. He was just 32-years-old and left a widow and  two young children.

Additional information provided by Graham Birch.
A full list of sources used to create this page can be found here.