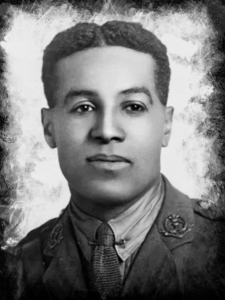 Walter Daniel John Tull (1888-1918) was born in Folkestone, Kent on 28 April 1888 and died in northern France on 25 March 1918. The first black outfield player to feature in the English top flight, Tull spent two seasons at Tottenham Hotspur before going on to play over 100 games for Northampton Town. During the First World War, Tull joined the British Army and would later become the first black officer to lead white troops into battle. After serving on the western and Italian fronts, Tull was killed in action on 25 March 1918 aged 29.

Walter Tull began his football career at east London amateur side Clapton, where he would win the London Senior Cup, the FA Amateur Cup and the London County Amateur Cup during the 1908/09 season. His short time at Forest Gate came to an end soon after when he was invited to join Tottenham Hotspur on their pre-season tour to South America in the summer of 1909. Impressing sufficiently, Tull was offered professional terms by the club and duly signed ahead of the 1909/10 campaign.

Handed his debut in a 3-1 loss at Sunderland on 1 September 1909, Tull soon won praise for his early performances but would also face considerable prejudice and racial abuse from the terraces.  After making a further five appearances, Tull was dropped from the first team and would not play again until 24 December 1910 when Spurs won 3-1 at Nottingham Forest. He would then score in 1-1 home draw with Manchester City three days later before making his final appearance for Tottenham in a 2-0 defeat at Woolwich Arsenal. Soon after, Tull left White Hart Lane to sign for Herbert Chapman’s Northampton Town.

The move to the County Ground would prove to be the defining moment of Tull’s career and after making his debut against Watford on 21 October 1911, he would go on to become an integral part of Chapman’s side. Over then next three seasons, Tull would score nine times in 110 games and flourished further still when his manager switched him from his traditional half-back role to inside-forward. By the time he played his final game for Northampton, Tull had become one of the club’s most popular players.

After joining the British Army in December 1914, Tull returned to Britain for an officer’s training course and subsequently agreed to play for Scottish club, Glasgow Rangers. Despite signing terms on 2 February, however, Tull would return overseas soon after having made no official appearances for the club.

Private F/55 Tull enlisted in the 17th (Service) Battalion of the Middlesex Regiment (1st Football) on 21 December 1914 and would subsequently spend time at Cranleigh, Clipstone Camp and Perham Down. Tull would also soon earn promotion and by the time he landed in France with the on 18 November 1915, he was serving as a sergeant.

In May 1916, Tull was sent back to Britain suffering with what was recorded on his medical records as “acute mania” but was soon to become known as shellshock. He would later return to action and was with his  by the time it took part in heavy fighting at Delville Wood, Guillemont and the Redan Ridge during the Somme offensive.

After another period in hospital, this time suffering from a bout of trench fever, Sgt Tull was sent to Scotland in January 1917 to attend officer training. After overcoming significant opposition, he eventually completed the course and was subsequently commissioned as a second lieutenant. Initially attached to 5th Battalion of the Middlesex Regiment, 2nd Lt Tull joined the 23rd Battalion, also known as the 2nd Footballers, on 4 August 1917. After taking part in the Third Battle of Ypres the battalion was sent to Italy in November 1917, where Tull is believed to have become the first black officer to lead white troops into battle.

Tull was Mentioned in Despatches after a trench raid on 1 January 1918 and recommended for the Military Cross, which was not granted. The 23rd Middlesex then returned to France and were in positions near Beugny when the Germans launched their Spring Offensive on 23 March 1918.

Two days later, the battalion came under an intense hurricane bombardment west of the Arras-Bapaume road and suffered heavy casualties during a forced withdrawal. Amongst the dead was 2nd Lt Tull who had been hit by machine-gun fire as he attempted to rally his men. Despite attempts to bring the 29-year-old back to British lines, all efforts were checked by heavy German fire and his body was never found. Today, Tull’s name is one of almost 35,000 recorded on the Arras Memorial to the Missing at Faubourg d’Amiens Cemetery.