THE STORY OF WALTER TULL 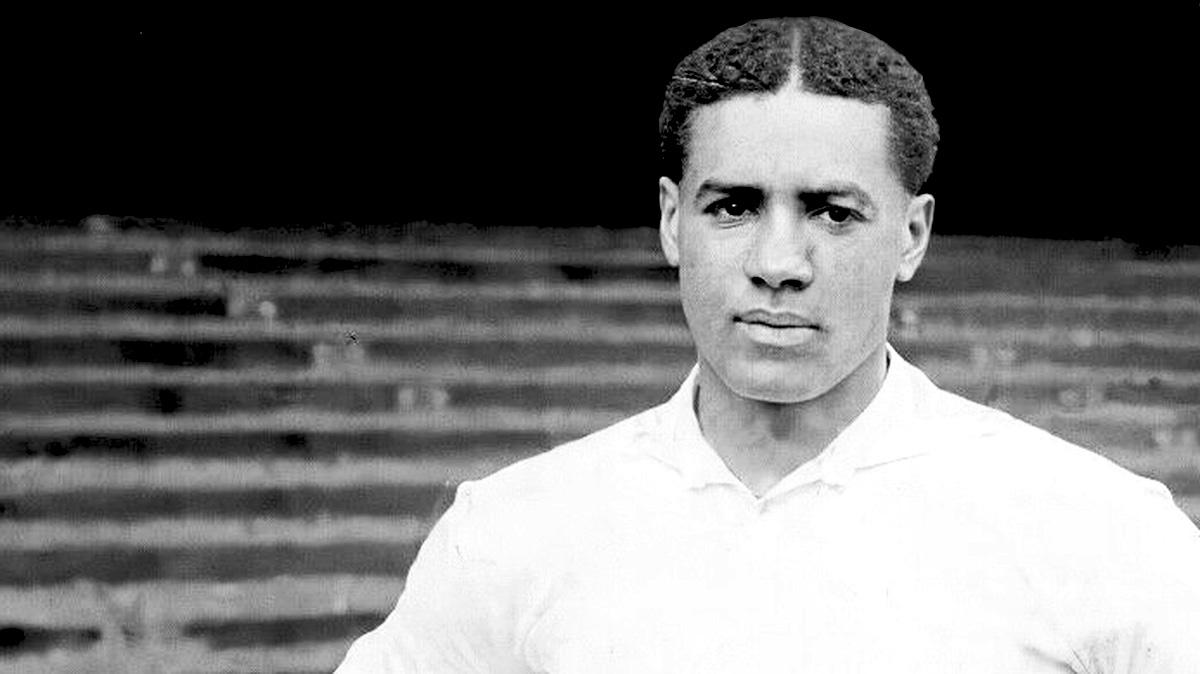 The story of Walter Tull is perhaps the best known of all the professional footballers to lose their lives during World War One. The first black outfield player to feature in the top division of English football and the first black officer to lead British combat troops into battle, Tull served with distinction on both the Western and Italian fronts, before he was killed in action on 25 March 1918.

Born in Folkestone on 28 April 1888, Walter Tull was the descendent of a slave whose father, Daniel, had married local girl, Alice Palmer, on his arrival in Britain from Barbados in 1876.  One of six sons born to the couple, tragedy was to strike the Tull family in 1895 when Alice lost her life to cancer.

Left alone to care for his young family, Daniel Tull married the niece of his late wife just 12 months after her death and the couple had their first daughter soon after. The family was soon to be bestowed by further tragedy, however, when Daniel died of heart disease in 1897, leaving his young wife, Clara, to care for the children alone. Unable to fully support the family, Clara Tull took the decision to send the two boys of school-age, Walter and Edward, to the Children’s Home and Orphanage in Bethnal Green, East London. Established by Wesleyan Methodist minister, Reverend Thomas Stephenson, the orphanage would represent home for the Tull brothers for the next two years.

In November 1900, Edward Tull was adopted by Scottish dentist James Warnock and left Bethnal Green to live in the Warnock family home in Glasgow. Walter would remain alone at the orphanage, however, he was able to keep in contact with both his recently-departed brother and his estranged family, enjoying visits to and from Scotland and Folkestone. When Tull left school in 1902, he secured an apprenticeship in the print industry and harboured hopes of eventually working for one of London’s many newspapers.

Despite his ambition, Tull’s career path would take a markedly different course in 1908 when he underwent a trial at Clapton Football Club. After impressing bosses at the East London amateur side, Tull was handed an opportunity in the first team in October 1908 and would not look back. Playing at inside-left, Tull made an immediate impact and would eventually help steer Clapton to glory in the London Senior Cup, the FA Amateur Cup and the London County Amateur Cup.

Tull was a revelation during his first season at Clapton and his performances had not gone unnoticed.  In the summer of 1908, English First Division side Tottenham Hotspur asked the 20-year-old to leave Forest Gate and move across London to White Hart Lane. Within weeks, Tull was with the club on their pre-season tour of South America. After playing games in Argentina and Uruguay, Tull returned to Britain and was offered a professional contract by Tottenham. Despite some reservations, Tull eventually signed terms and was paid a £10 signing-on fee and a weekly wage of £4. Six weeks later he made his Football League debut in a 3-1 defeat at Sunderland.

Despite earning considerable praise for his early performances, Tull would face significant prejudice as he attempted to establish himself in the English top flight. As only the second black footballer in the history of the professional game, Tull was taunted by supporters and faced significant racial abuse. One of the most notorious incidents came during a goalless draw at Bristol City on 9 October 1909, when the abuse proved so bad that it would make the pages of the national press.

Two weeks later, Tull played his final match of the season as Tottenham fell to a 3-1 home loss to Middlesbrough. He was subsequently dropped by manager Fred Kirkham and would have to wait until 24 December 1910 to get his next opportunity in the first team. Given his chance in an away game at Nottingham Forest, Tull helped his side to a 2-1 win and was rewarded with another run-out in a home tie against Manchester City three days later. Grasping his opportunity, Tull put in a man-of-the-match performance and scored only his second goal for Spurs as the match finished 1-1.

Tull’s re-introduction to first team football was to prove short-lived however, and he would not feature again until Tottenham travelled to Plumstead on 8 April 1911 to take on Arsenal. The match, a 2-0 loss, would prove to be his last for the club and soon after Tull left North London to sign for Southern League outfit Northampton Town. The switch to Herbert Chapman’s side proved to be the defining moment in Tull’s career and he would soon establish himself as one of the club’s best players and also its most popular with supporters. In his time at the County Ground, Tull would score nine goals in 110 games playing at half-back, earning considerable praise for his dynamic displays.

Circumstances were to soon change however, when Great Britain declared war on Germany on 4 August 1914. Having decided to offer his services to the British Army, Tull abandoned his football career and enlisted in the 17th (Service) Battalion of the Middlesex Regiment, better known as the Footballers’ Battalion, on 21 December 1914. Tull was seemingly well-suited to life as a soldier and was soon promoted through the ranks. After spending time at Cranleigh, Clipstone Camp and Perham Down, the-now Sergeant Tull landed at the French port of Boulogne with his on 18 November 1915. Out of the front line, the men played as much football as possible and within only a few weeks of their arrival in France, Tull had played for the team in the Divisional Cup.

Having experienced their first taste of trench warfare around the mining town of Loos in late 1915, the 17th Middlesex soon began to suffer casualties. Among those was Sgt Tull, who was sent back to Britain suffering with what was recorded on his medical records as acute mania but was soon to become known as shell shock. After recovering from his injuries, Tull was back in action with his unit by September 1916 and would take part in heavy fighting at Delville Wood and Guillemont during the Battle of the Somme. The then took part in an attack on Redan Ridge on 13 November 1916, during which it would suffer significant losses.

Having come through the Somme offensive relatively unscathed, Tull was again sent back to Britain in December 1916, this time suffering the effects of trench fever. Following another hospital stay, Tull recovered sufficiently to be passed fit and given orders to return to France. Instead of rejoining his unit however, Tull was sent to Gailes in Scotland to attend officer training. The decision to send Tull to Gailes was a significant moment for both the footballer and the British Army. With military regulations previously forbidding any “negro or person of colour” from serving as an officer, Tull faced considerable opposition from both the course instructors and his fellow students. Nonetheless, Tull excelled and would also soon find himself back in demand on the football field.

Alerted to his presence in Ayrshire, Glasgow Rangers approached Tull and offered him the opportunity to play competitive football during his stay in Scotland. Despite signing for the club on 2 February 1917, Tull was destined to play no further part in professional football and would leave Britain in May 1917 after being commissioned to the rank of second lieutenant – the first black combat officer at that time. Tull was subsequently attached to 5th Battalion of the Middlesex Regiment before joining the 23rd Battalion, also known as the 2nd Football, on 4 August 1917. After seeing action during the Third Battle of Ypres the unit was sent to the Italian Front in November 1917, where Tull is believed to have become the first black officer to lead white troops into battle.

In a raid on 1 January 1918, Tull waded across the dangerous River Piave with his men on two separate occasions, before eventually leading them back to safety with no loss of life. For this gallantry and coolness under fire, Tull was Mentioned in Despatches by his Commanding Officer. He was also recommended for the Military Cross, which was not granted. On 8 March 1918, the battalion returned to the Western Front and were soon thrown into positions north-east of Bapaume in an effort to stem the huge German offensive that was launched on 21 March. Designed to break through Allied lines and advance in a north-westerly direction to seize the Channel ports, the attack had already seen significant gains and German commanders were confident of landing a decisive blow that would finally end the war.

On the morning of 23 March 1918, the 23rd Middlesex were in trenches near Beugny when they came under heavy artillery bombardment from enemy positions. Having already suffered a number of casualties, the unit were forced to retreat in the face of sustained attacks from German troops. After a further two days of heavy fighting the battalion withdrew further, eventually taking up positions on a railway embankment west of the Arras-Bapaume road. At 0800 on 25 March, the battalion was subjected to an intense hurricane bombardment which was followed by an assault by German infantry. In the face of overwhelming pressure, the 23rd Middlesex were forced into an orderly withdrawal until they were finally relieved the following day. During the desperate and chaotic fighting, the battalion had suffered heavy casualties, including 13 officers and other ranks killed and 61 wounded. There were also 38 men still missing.

Among the dead from that day was 2nd Lt Tull, who had been cut down by machine gun fire as he attempting to rally his men. Despite attempts to bring the popular 29-year-old back to British lines, all efforts were checked by heavy German fire and his body was never found. After the war, Tull’s name was one of almost 35,000 recorded on the Arras Memorial to the Missing at Faubourg d’Amiens Cemetery. The German offensive that had begun in March 1918 was finally stopped near Amiens in August 1918 and would prove to be the final throw of the dice. In the subsequent Hundred Days Offensive, Allied troops would pursue its enemy in a steady advance east until the First World War came to an end on 11 November 1918.

In 1999 a memorial to Tull was unveiled outside Northampton Town’s Sixfields Stadium, while there is currently a campaign and e-petition calling for the footballer to be posthumously awarded the Military Cross he was recommended for during his time in Italy. Most recently, the Royal Mint announced that Walter Tull would feature on one of a set of six £5 coins, commissioned to remember the sacrifice made during the First World War. 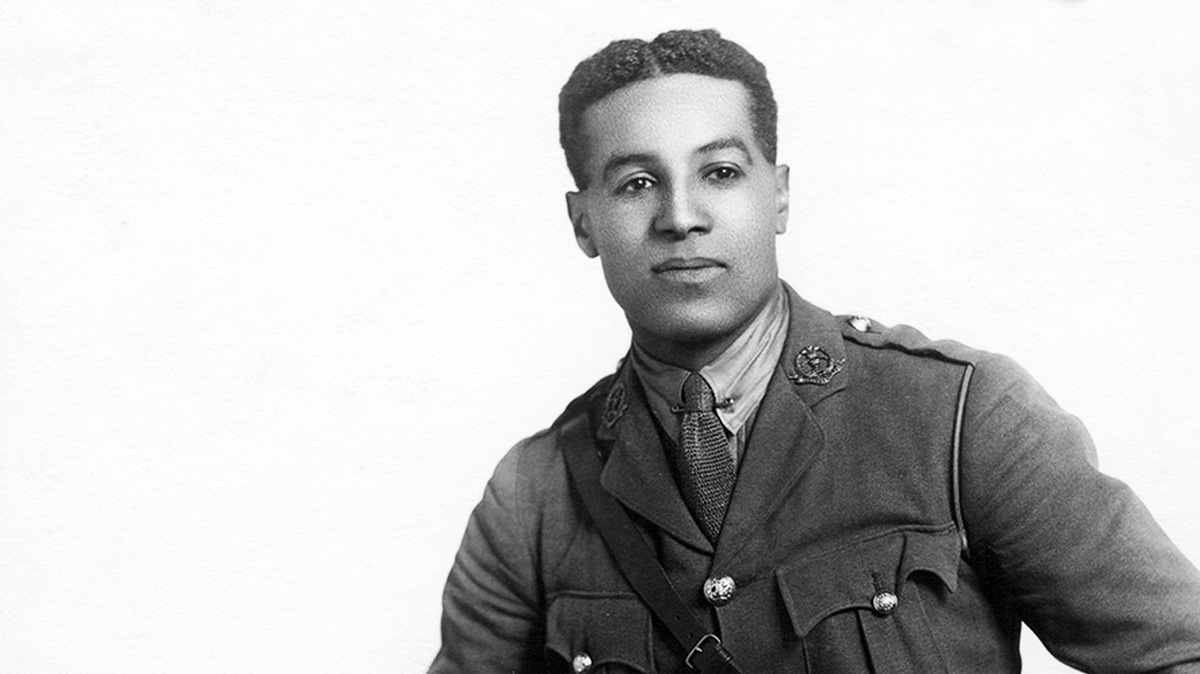