THE STORY OF WILFRED BARTROP 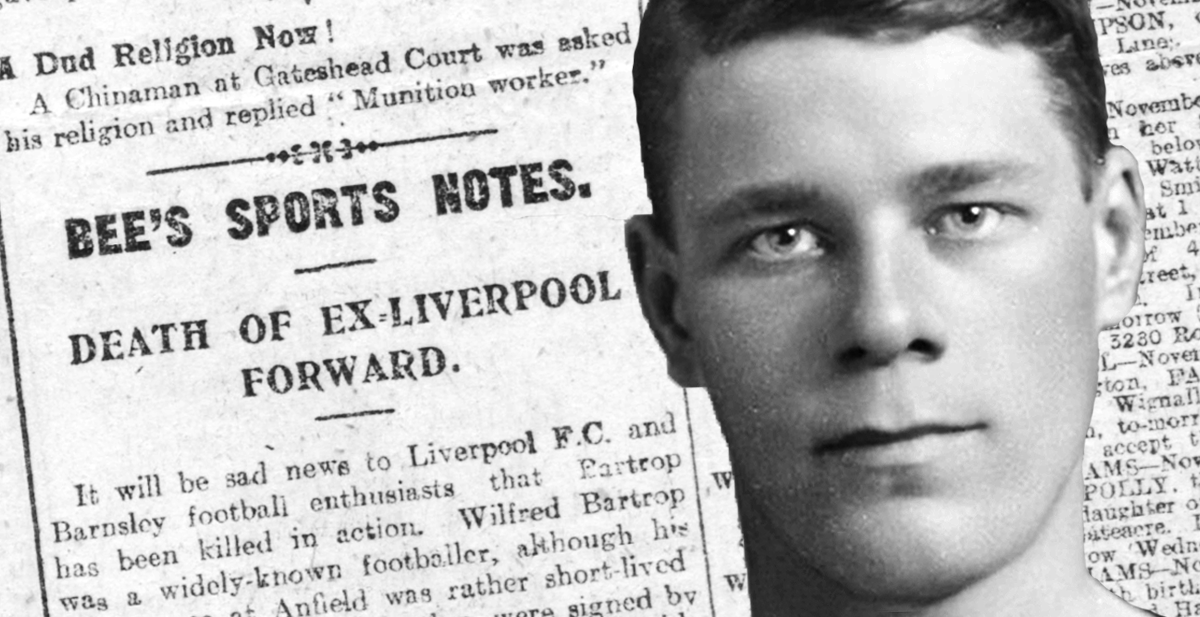 Wilfred Bartrop was a popular outside-forward who played in two FA Cup finals for Barnsley before joining Liverpool in the months leading up to the First World War. He would later serve on the Western Front with the British Army, before losing his life just four days before the Armistice in November 1918.

Born in Worksop, Nottinghamshire on 22 November 1887, Charles Henry Wilfred Bartrop was the first of 13 children raised by timber yard worker Benjamin Bartrop and his wife, Annie. His early life was much like any other working-class child during a period of great industrial growth, with his family moving a number of times as housing and sanitary reforms increased living standards in the Worksop area.

Bartrop would  prove himself a talented footballer in his early years and by the age of 20 he had joined local Midland League side Worksop Town. The youngster wasted little time establishing himself at his new club and soon became an integral part of the Worksop team as a pacy and powerful outside right. These impressive displays soon attracted the attention of a number of professional clubs and it soon became apparent that Bartrop’s time at his hometown club would be short-lived.

Barnsley and the FA Cup

On 21 June 1909, the inevitable happened when Football League side Barnsley paid Worksop Town a “substantial fee” to secure the services of their influential winger. Soon after, Bartrop moved to South Yorkshire to begin his career as a professional footballer. Settling quickly into life at Oakwell, Bartrop was handed his first team debut on 4 September 1909 when Barnsley fell to a 3-0 loss at Peak District side, Glossop. Despite the inauspicious start, Bartrop would soon earn praise for a string of impressive performances and by the end of his debut season, he had scored twice in 34 league games.

It was in the FA Cup that Bartrop found greatest success that season, however, as he played every game of Barnsley’s run to the final. Facing First Division Newcastle United at Crystal Palace, Barnsley came within a whisker of causing a major upset before Jock Rutherford cancelled out Harry Tufnell’s first half goal with just minutes remaining. There was to be no repeat of the heroics when the teams met again at Goodison Park five days later, and Barnsley were dispatched by a brace from Newcastle’s prolific centre-forward, Albert Shepard.

Despite the disappointment of losing the 1910 FA Cup Final, Barnsley were to reach the same stage two years later, where they faced West Bromwich Albion. Again, the tie went to a replay after the first match ended in stalemate. The Yorkshire side were determined to avoid defeat this time, however, and Harry Tufnell struck deep into extra time to secure Barnsley their first and only FA Cup triumph.

By the time Bartrop left Barnsley in 1914, he had played 183 league and cup games and scored 17 goals for the club. His performances in both FA Cup runs had also been integral to Barnsley’s success and he continued to be held in the highest regard by their supporters long after leaving Oakwell.

After playing his final game for Barnsley in  a 1-0 win at Hull City on 25 April 1914, Bartrop travelled to Merseyside to sign for Liverpool for a fee reported to be in the region of £900. It was a substantial amount at the time, nonetheless, Bartrop had already proved his worth during five seasons at Oakwell. Despite arriving with huge expectations, Bartrop’s time at Anfield was to prove largely frustrating as he struggled to dislodge preferred outside right Jackie Sheldon (who would later serve a ban following the notorious Good Friday match-fixing game against Manchester United) from Tom Watson’s side.

Set against the backdrop of the First World War, Bartrop had to wait until 19 December 1914 to make his Liverpool debut and would play just two further games before the 1914/15 season drew to a close in April 1915. With professional football subsequently suspended until the end of hostilities, Bartrop took the decision to return to Nottinghamshire where he began vital war-work in the pit at Worksop’s Manton Colliery.

During the next two and a half years, Bartrop continued to play football and would make a number of wartime guest appearances for local clubs – including one high-profile turnout for Notts County in a match against former side Barnsley on 9 September 1916. By the start of 1918, however, he had decided to offer himself for military service.

In January 1918, Bartrop walked out of his job at Manton Colliery and joined the British Army as a Gunner in the Royal Field Artillery. Subsequently posted to 40th Division’s X.40 Medium Trench Mortar Battery, Gunner 252418 Bartrop embarked for France on 13 June 1918. He was then sent into action with his unit near the town of Cambrai and later saw action at Bourlon Wood.

In October 1918, X.40 TM Battery moved to an area close to the Belgian villages of Warcoing and Pecq where plans were being made for an assault on German lines across the River Escaut. Tasked with providing mortar support for the attacking infantry, the battery were in positions at Warcoing on 7 November when they came under heavy enemy artillery fire.  Unable to find adequate cover, Bartrop was severely wounded across his legs and chest and died soon after. He was 30-years-old.

The attack of 7 November proved to be 40th Division’s last day of offensive action as German forces withdrew from their positions across the River Escault the following day. Three days later, World War One came to an end. Bartrop was subsequently buried at Warcoing Churchyard, which contains just four Commonwealth burials from The Great War – all dating from October 1918 and the Advance to Victory.