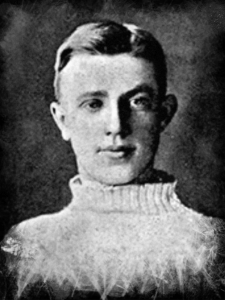 William Barr Borland (1888-1915) was born in the Scottish town of Darvel on 21 August 1888 and died in Belgium on 25 September 1915. A centre-half by trade, Borland had a limited career in English football and would play only three first team matches during a short spell at Fulham. During the First World War, Borland enlisted in the British Army and would lose his life on the first day of the Battle of Loos in 1915.

The Scot was handed his senior debut in April 1911 when injury to first-choice centre-half, Fred Maven, saw Borland play three games in the space of four days. Further opportunities proved difficult to come by, however, and despite establishing himself as captain of the reserve side, Borland left Craven Cottage in 1912 having made no further appearances for the first team.

After returning to Scotland, Borland had brief spells at Galston and Dumfires before joining the British Army soon after the outbreak of the First World War.

Private S/14013 Borland enlisted in the 7th (Service) Battalion of the Cameron Highlanders on 26 October 1914 and was posted to D Company.  After moving to Aldershot for training in November 1914, the battalion came under orders of 44th Brigade in 15th (Scottish) Division and spent time at Liphhook, Cirencester, Chisledon and Tidworth before embarking overseas.

The 7th Camerons landed at the French port of Boulogne on 9 July 1915, after which they moved into reserve position near Bruay. On 25 September 1915, the battalion took part in the opening day of the Battle of Loos, where the British Army suffered devastating losses. Among the casualties was Borland who was killed during the offensive and whose body was initially buried nearby, but later lost.

Borland’s name is now listed on the Loos Memorial at Dud Corner Cemetery, among 20,610 other British and Commonwealth soldiers who were killed during the battle and have no-known grave. He was 27-years-old at the time of his death.