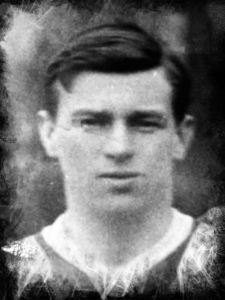 William Henry Maughan (1894-1916) was born in West Stanley, County Durham in July 1894 and died on 2 October 1916 in northern France. A tenacious wing-half, Maughan played 24 games in two seasons at Fulham, before competition was suspended for the duration of the First World War. After subsequently enlisting in the British Army, Maughan was killed during the Battle of the Somme aged 22.

After spending his early career at local sides West Stanley and Easington Colliery Welfare, Maughan joined Second Division Fulham in February 1914 and made his debut in a 2-1 home loss to Leicester Fosse soon after.

Maughan subsequently became a first team regular at Craven Cottage and would play 21 league and one FA Cup game during the 1914/15 season, after which official competition was suspended for the duration of the war. Maughan would then play six wartime games for Fulham before finally leaving the club to serve overseas with the British Army.

Private 6/2068 W. Maughan enlisted in the 1/6th Durham Light Infantry in 1915, a territorial unit who had arrived in France in April of that year as part of 50th (Northumbrian) Division. After sustaining heavy casualties during the Second Battle of Ypres, the 1/6th merged with 1/8th to form 6/8th DLI but were to resume their original identity in mid-August 1915.

During the Battle of the Somme, the battalion saw action in the subsidiary battles of Flers-Courcelette (15-22 September 1916) and Morval (25-28 September) before taking part in the assault on the Transloy Ridges at the start of October 1916. It was during the latter action that Maughan, by then a corporal, would sustain serious wounds and be moved back to a casualty clearing station at Dernancourt.  The 22-year-old subsequently died from his wounds on 2 October 1916 and was buried in Dernancourt Communal Cemetery Extension.