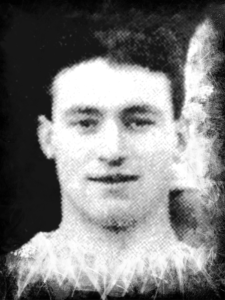 William John Oliver (1892-Unknown) was born in Walthamstow, East London in September 1892. An outside-left who had two spells at Tottenham Hotspur, Oliver struggled to establish himself in senior football and had played just two games for Spurs when the First World War brought a premature end to his career. Oliver was then one of the first volunteers in the newly-raised Footballers’ Battalion and would serve overseas on the Western Front before being discharged due to injury.

Oliver began his career at Tottenham Hotspur where he first featured for the club’s reserve side during the 1908/09 season. Despite playing a number of games for the second string, Oliver struggled to establish himself further at White Hart Lane and was allowed to leave the club in 1909. Over the next four years, Oliver played for amateur side Walthamstow Grange where he impressed sufficiently to earn a move back to Tottenham in November 1913.

After signing professional terms at White Hart Lane that month, Oliver was given his senior debut in a 3-3 draw at Aston Villa on 20 December 1913 and would play in a 1-1 home draw with The Wednesday one week later. He was then part of the Tottenham squad during the 1914/15 season but had to be content with reserve team football. He would make no further senior appearances for Spurs and left the club after joining the British Army.

One of the first men to volunteer for service the newly-formed Footballers’ Battalion, Private F/34 Oliver enlisted in 17th (Service) Battalion, The Middlesex Regiment (1st Football) at Fulham Town Hall on 15 December 1914. After subsequently spending time at Cranleigh, Surrey and Clipstone Camp near Mansfield, the battalion moved to Perham Down in August 1915 where they prepared for deployment overseas.

The 17th Middlesex left Britain on 16 November 1915 and disembarked at the French port of Boulogne the following day. They then moved to Ostrohove Camp before heading south to billets at Les Ciseaux, a small village located south-west of Hazebrouck. A few days later, the battalion moved to Isbergues.  It was during the period that Oliver reported sick suffering damage to the right knee. Admitted to No 11 General Hospital in Boulogne on 19 November 1915, Oliver subsequently signed an Army From B.117 to declare the injury was not sustained during performance of military duty. He returned to Britain on the 1 December 1915 after just 15 days on active service.

On 15 December 1915, Oliver was posted to the 27th (Reserve) Battalion before finally being discharged from the Army on 15 September 1916 as “no longer physically fit for war service”. He was subsequently awarded the Silver War Badge (85947) on 7 December 1916.