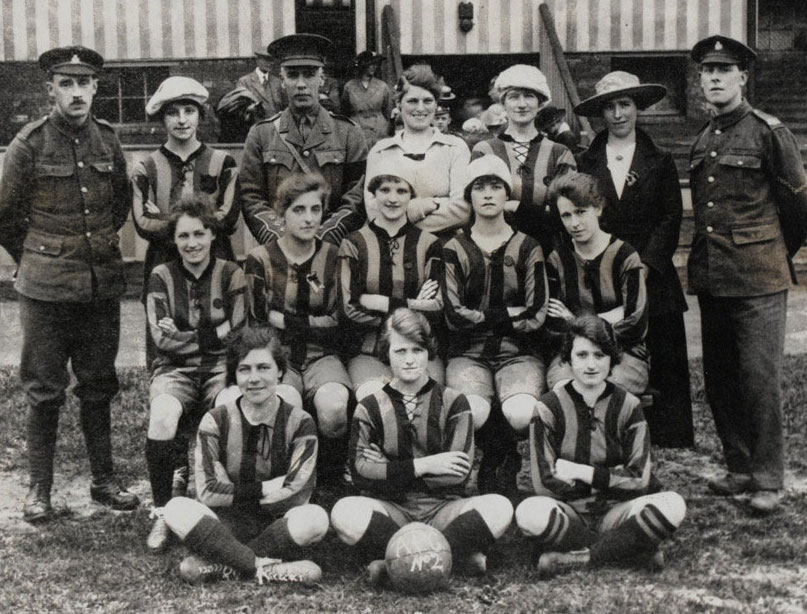 Interviewed by a representative of the Imperial War Museum in September 1976 about her experiences of the First World War, Bessie Davies talked about her experiences as a munitions worker, with football as her major leisure activity between long, dangerous and physically-demanding shifts.

It is worth listening to the fourteen-minute interview (catalogue number 828 here) in some detail because it reveals a much wider point about the history of women’s football during World War One being ‘hidden from history’.

Born in Hopkinstown, Pontypridd South Wales, Bessie was one of eighteen surviving children of a fireman who worked in the local colliery. She moved to employment as a civilian with the Royal Ordnance Works, first in Birmingham and then to Coventry between 1914-1919.

The interviewer is primarily interested in her role as a munitions worker and it is not until Bessie mentions her love of football that he asks a little more but the excerpt on her sporting career lasts a brief minute and a half. While it would be difficult for a British person to know absolutely nothing about the history of football, so ubiquitous are references to the sport in our past, those who are interested in women’s football have to rely on such snippets as the basis of historical research.

What appears to have been the first home international women’s association football match took place on the 9 May 1881 when a team calling themselves England played a side named Scotland at Easter Road, Edinburgh. Scotland won 3-0 thanks to goals from Lily St Clair, Louise Cole, and the combined play of Georgina Wright and Isa Stevenson. Although the teams played at least seven matches, information remains patchy. Edinburgh versus Grimsby scheduled a match in 1887, leading the English port to claim the first women’s football club side, though working women in Sunderland also played.

A London-based team, the British Ladies Football Club (BLFC), was founded in 1895 with Secretary Nettie Honeyball, although genealogical searches have been unable to ascertain whether she used a pseudonym. The BLFC also played in Scotland and the north-east. Although Lady Florence Dixie agreed to act as President and promoted the club in newspaper interviews, the experiment lasted for less than two seasons, as did the Original English Lady Cricketers professional touring team formed the same year.

However, as the case of Bessie Davies indicates, women’s football grew rapidly between 1917 and 1922 in Britain largely as a result of the changing nature of female work. Well-known examples of nineteenth century company paternalism had already benefitted female recreation and sporting provision, such as provided by Quakers Joseph Rowntree and George Cadbury.   However, war-time industrial welfare schemes sought to monitor women’s leisure as well as their work. Popular historian Patrick Brennan has used the term Munitionettes football to describe women playing matches in front of crowds of up 55,000 in aid of charity between 1917 and 1921.

This is something of a misnomer in two senses. Firstly, once the Eastern front had collapsed, the demand for munitions decreased and demobilisation began before the Armistice in November 1918. Some women’s teams had military links. The Lancashire United Transport Company based in Atherton had a team as early as 1915 and the women of the Preston Army Pay Corps had already played at Deepdale, the home of Preston North End Football Club in 1916.

The most famous team, Dick, Kerr Ladies of Preston had began to play seriously in October 1917 based at the Strand Road tram building and light railway works, originally founded by W. B. Dick and John Kerr of Kilmarnock. The team would play more in peacetime than during hostilities, therefore. Regional pride had, of course, been developing for a much longer period with a music hall song commemorating Preston North End as first champions of the Football League and of the FA Challenge Cup in 1889.

The manufacturing and service sectors gave some women the camaraderie, contacts and time to initiate their own activities. There were other work-based women’s teams such as Horrockses’ Ladies, of the mill owned by the family known as the Cotton Kings of Preston, and Atalanta, an affiliation of professional women, such as teachers and nurses. Other kinds of industrial welfare and generalist enthusiasm should therefore be acknowledged. Lyons tearooms had several women’s football teams too, for instance, and the company had a national network of outlets.

Football seems to have been chosen by the players, rather than the management, as a preferred sport and leisure activity. The Bessie Davies interview also suggests that there was more girls football played in school than has so far been acknowledged. Rather than league football, women’s teams raised considerable funds for charity, more after World War One had concluded than during the conflict.

There were also some examples of sporting migration (either in the long or short term) and a lot of ‘curiosity tourism’. Large crowds were drawn to watch women’s football and international ties with France, Belgium and other European teams. This received national broadsheet recognition as evidenced by the illustrated report: ‘Ladies at Football England v France by a Special Correspondent’ The Times 7 May 1920. In 1920 and 1921 the crowds grew, although we cannot be sure how much motivation to attend by paying spectators was down to altruism or enjoyment. The coal disputes of 1921 and 1926 saw more sides develop in response to localized deprivation: teams included the Soup Canteen Ladies; Blaydon Ladies’ FC and the Marley Hill Spankers.

As a result of this success, the FA ‘banned’ women’s teams from playing football on League and Association-affiliated grounds from 5 December 1921. The FA ruled that too much money had been absorbed in expenses by players and the game was ‘unsuitable’ for women. There was no evidence that serious injury had been sustained by a woman, except a report that Florrie Redford (1900-1986) had once been bitten on the ankle by a dog while playing.

Exhibition games sought to question the ban, for example, Lyon’s Ladies ‘performed’ for thirty members of the press at Sudbury on 13 December 1921. Alfred Frankland then invited twenty plus doctors to watch a Dick, Kerr game on Boxing Day 1921 where the suitability of the sport was deemed by one reporter as no more taxing than a day’s heavy washing or work. However, it remained a minority sport for over fifty years, with the Football Association grudgingly lifting the ban in England in 1969 and forming the first women’s international side in 1972.

Dr Jean Williams
Author of ‘A Game for Rough Girls: A History of Women’s Football in England.’