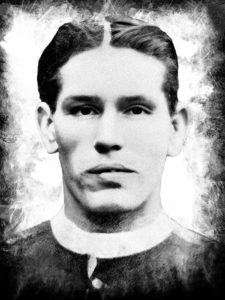 Arthur Henry Hooper (1888-1963) was born in the Staffordshire town of Brierley Hill on 5 December 1888 and died in Kidderminster on 22 December 1963. An inside-forward by trade, Hooper spent most of his football career at Manchester United before moving to Crystal Palace in 1914. During World War One, Hooper served in the British Army and was wounded on the Italian Front. He would play no further part in football following the Armistice and eventually died in 1963 aged 75.

Hooper’s senior football career began in the Birmingham and District League with Kidderminster Harriers where he impressed sufficiently to attract the attention of a number of bigger clubs, including Manchester United. Persuaded to join the reds with teammate Tom Homer in October 1909, Hooper subsequently scored on his debut – a 5-0 rout over Tottenham Hotspur in the final game at Bank Street on 22 January 1910. He would then play in United’s 1-0 loss at Preston North End on 5 February but would make no further appearances that season.

Despite being at United for almost five seasons, Hooper would largely struggle to establish himself at a club that could call upon the services of household names such as Sandy Turnbull, Enoch West and Billy Meredith. By the time he was allowed to leave Old Trafford on a free transfer at the end of the 1913/14 season, Hooper had made just seven appearance and scored once.

Subsequently snapped up by Southern League side Crystal Palace ahead of the 1914/15 season, Hooper would find playing time much easier to come by and scored twice in 18 appearances as his new side finished 15th. It would prove to be the most successful campaign of Hooper’s career and also his last. Following the suspension of official competition, Hooper undertook work in a munitions factory before joining the British Army. He would not return to football following the war and eventually died in Kidderminster in 1963 aged 75.

Private 202878 Hooper enlisted under Lord Derby’s Group Scheme on 11 December 1915 and was subsequently mobilised on 1 July 1916. He would then undergo military training in Britain before arriving at the French port of Le Havre on 25 August 1917. Posted to the 1/8th Battalion of the Worcestershire Regiment, Pte Hooper joined his unit on 6 September and was posted to ‘D’ company. As part of 144th (Gloucester & Worcester) Brigade, 48th (South Midland) Division, the 1/8th Worcesters were already involved in the Third Battle of Ypres when Hooper joined them and would later take part in subsidiary actions at Polygon Wood, Broodseinde and Poelcappelle.

In November 1917, the division received orders that it was to move to the Italian front and by 1 December all units were in Italy. Hooper was then admitted to hospital on 19 December with an injury to his right leg but was back with his unit by Christmas Eve. Appointed lance corporal on 4 March 1918, Hooper was promoted to corporal on 1 May before being admitted to hospital two weeks later suffering from influenza. After spending time in hospital in Genoa, Hooper was sent to the Army’s base depot at Arquata before returning to his on 2 July 1918.

On 30 July 1918, Hooper received a gunshot wound to the head and was treated by 1/3rd South Midland Field Ambulance before being transferred to 39 Casualty Clearing Station by No. 43 Ambulance Train. He was later evacuated to No. 81 General Hospital in Marseille, France where he remained for the remainder of the war. Following the armistice, Hooper was appointed acting company sergeant major (A/CSM) and attached to 517th Prisoner of War Company of the Labour Corps. He returned to Britain on 2 September 1919 and was finally demobilised and transferred to Class “Z” Army Reserve on 29 September 1919.

Additional information supplied by Lawrence Trask.
A full list of sources used to create this page can be found here.