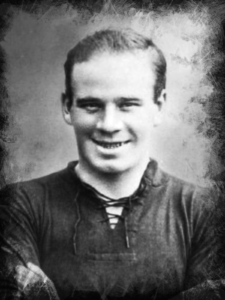 William Naismith Blyth (1895-1968) was born in the Scottish town of Dalkeith on 17 June 1895 and died in Worthing, West Sussex on 1 July 1968. An experienced inside-forward, Blyth spent most of his career at Arsenal after World War One, during which he joined the British Army and served in France and Flanders. In 1930, Blyth appeared in the motion picture The Great Game before working as a publican in retirement. He died in 1968 aged 73.

Blyth began his career playing junior football for local club Wemyss Athletic before moving to Manchester City in 1913. His time at Hyde Road was to prove to be short-lived, however, and less than 12 months later Blyth headed south to sign for second division side Arsenal. Handed his debut in a 3-0 loss at Huddersfield Town on 21 November 1914, Blyth would play a further 11 games for Arsenal during the 1914/15 season, scoring five goals. His career was then put on hold as official competition was suspended for the duration of the war.

Following demobilisation from the army, and after playing one game for Scottish side Third Lanark, Blyth returned to Highbury to resume his football career. He would then play 29 league and one FA Cup game during the 1919/20 campaign, Arsenal’s first back in the English top flight. Over the next nine seasons Blyth would play 300 games in all competitions for the Gunners and was named club captain in 1925. Two years later, Blyth was in the side that contested Arsenal’s first-ever FA Cup Final, which they subsequently lost 1-0 to Cardiff City.

In the summer of 1929, Blyth moved to the Midlands to sign for Birmingham, where he made his debut on 31 August 19129 in a 2-1 defeat at local rivals Aston Villa. He would go on to play a further 18 games during the 1929/30 season, scoring a respectable five goals.

In 1930, Blyth appeared in one of the earliest films to feature football as a main theme, The Great Game, but would find playing opportunities at St. Andrew’s more difficult to come by. At the end of 1930/31, Blyth decided to leave Birmingham having played just two further games for the club. Following a brief spell back at Arsenal, Blyth finally retired from the game and returned to Scotland to work as a publican in the town of Port Seton, Midlothian. He moved back to the South of England in later life and finally died there in 1968 aged 73.

Blyth is known to have enlisted in the Royal Army Service Corps during the First World War and is also believed to have served overseas. No service records survive for Blyth, however, meaning definitive confirmation of his war service has not yet been possible.