THE FOOTBALL AND THE FIRST WORLD WAR STORY

It’s easy to miss the small British graveyard that sits on the western edge of Auchonvillers, a sleepy rural village in the Picardy region of northern France. Tucked away behind a spattering of farm out-buildings, on the road that takes you to the commune of Mailly-Maillet 2km away, Auchonvillers Military Cemetery goes largely unnoticed by the majority of visitors to the Somme battlefields who are, understandably, more drawn to near-by memorials at Thiepval and Newfoundland Park.

Yet it was in this cemetery, containing the graves of 528 British and Commonwealth soldiers, that I stood on a cold autumn day some seven years ago and took the first steps on a journey that would lead to the creation of the Football and the First World War website. What began with modest objectives, an activity to learn more about the Great War experience of the club I have supported all my life, Manchester City, soon developed into an intense, and all-consuming, labour of love. It would take me to cemeteries and memorials across the battlefields of both France and Belgium and into libraries and archives up and down the United Kingdom.

As a City supporter, I had initially set out to discover how many of the club’s 1914/15 squad had served during the war and, more specifically, if any had lost their lives. Among the first names I came across while searching through the archives of the Manchester Evening News, and somewhat fortuitously it has to be said, was Thomas Farrell. I was, at this stage, still conducting preliminary research; however, the notification of Farrell’s death, published on 24 July 1916, immediately piqued my interest.”Corporal Thomas Farrell, Lancashire Fusiliers, a former Manchester City and Eccles Borough footballer, was killed on July 1. Twenty-nine years of age, he leaves a widow and three children, who live at 29 Eltoft-street, Deansgate. He Had been on active service twelve months.”

There was little information on Farrell in the club histories, and certainly no mention that he had been killed during the war. I informed City and also their official club historian, Dr Gary James, who had no knowledge of Farrell.

Born in Earlestown, an area of Newton-le-Willows, the inside-forward had experienced a nomadic but unremarkable career as a professional footballer. After a reported brief spell on the books at Woolwich Arsenal, he had returned to the north-west in 1905 to sign for City. After making just three senior appearances in two seasons at Hyde Road, Farrell moved again in 1907, this time to Scottish club, Airdrieonians. Unfortunately, he fared little better north of the border and by 1909 he was back in the north-west of England turning out for amateur side Eccles Borough – his uneventful time in professional football at an end.

When war came in August 1914, Farrell chose to enlist in the Lancashire Fusiliers and would go on to serve at Gallipoli with the 1st Battalion before eventually arriving in France in the months leading up to the Battle of the Somme. On the opening day of the offensive, 1 July 1916, the battalion was tasked with capturing positions near the village of Beaumont-Hamel. Launched at 7.30am, the assault proved a bloody failure and the fusiliers suffered almost five hundred casualties, including seven officers and 156 men killed. Among the dead was Thomas Farrell who was buried less than 2km from where he fell.

Visiting Farrell’s grave for the first time was a sobering experience. It was bitterly cold and a heavy mist clung to the ground. As I placed a small cross at the foot of his grave, shared with a private of the Machine Gun Corps, I realised his story, and those of many hundreds of players like him, featured little in the existing narrative of football during the First World War. As a professional, he had made little impact on the game and is unlikely to have been remembered by many fans – even in the years immediately after his retirement. Yet Farrell’s story, and untimely death, was surely of no lesser significance than those of the many better-known players who gave their lives during the war.

On my return from France, I decided to conduct further research and hoped, in some small way, to add to the existing material available on the subject. Much had already been written on the wartime experiences of players who served in the famous football battalions, the 17th and 23rd Middlesex Regiment and George McCrae’s 16th Royal Scots, all of which was of obvious importance, however, it was clear there was much more to the story. Footballers, or former footballers, were to be found in regiments throughout the British and Commonwealth armies during the war, while many others would serve in the Royal Navy and Royal Flying Corps (later amalgamated with the Royal Naval Air Service to form the Royal Air Force). Some had been highly decorated for acts of bravery or devotion to duty, including three recipients of the Victoria Cross, while others had appeared in front of military tribunals to appeal for exemption as conscientious objectors.

How these men experienced the war differed greatly and was often intensely personal to the individual. While some had survived seemingly unscathed, others had suffered long-lasting damage and would struggle to readjust to life on their return home. For all those footballers killed during the war, and there were many, a far greater number were wounded and many were forced to retire from a game that provided the only means of supporting their families. Despite the hardships, however, it was clear that football also helped cement bonds that could lift even the darkest of moments. Camaraderie forged on the football field were strengthened by experiences on the battlefield. It was this aspect of football’s wartime experience that fascinated me and I wanted to learn more. It was information one could find only by spending many hours scouring newspaper archives, military service records and personal collections, however, once the surface was scratched they began to reveal their secrets.

Football and the First World War

From these modest beginnings and with much kind help support along the way from far too many people to mention, the website soon developed into something far greater than I had ever envisaged. It has been time-consuming but incredibly rewarding. I have been honoured to work with some fantastic organisations, not least the National Football Museum and the Professional Footballers’ Association, and have also been privileged to speak to many relatives of men who fought, and in some cased died, on the battlefields a century ago.

In 2016, I was delighted to assist the The Woodland Trust with their tremendous “Club and Country” project. I believe it marks a new chapter in the story of football during the First World War and provides a perfect platform for us to contemplate and maybe even re-assess how we remember those dark days of the early 20th Century. As we commemorate the centenary of the 1918 Armistice, it is surely fitting that the Trust have created a living legacy to remember the dead.

The First World War was a great leveller. Death and injury made little distinction of class, creed, religion or indeed success on the football field. It took the lives of almost one million British men and affected the lives of a far greater number. Many of their stories were seemingly lost over time, forgotten as loved ones reached old age and died themselves. Yet they never truly disappeared and are now being rediscovered by a new generation keen to remember the past. I feel fortunate to be able to participate in that process of remembrance and if just one person takes time out of their busy schedule to pay their respects to one of football’s fallen, I feel I will have done my job. Who knows, maybe one could even stop at that cemetery on the outskirts of Auchonvillers and lay a cross at the grave of Thomas Farrell. 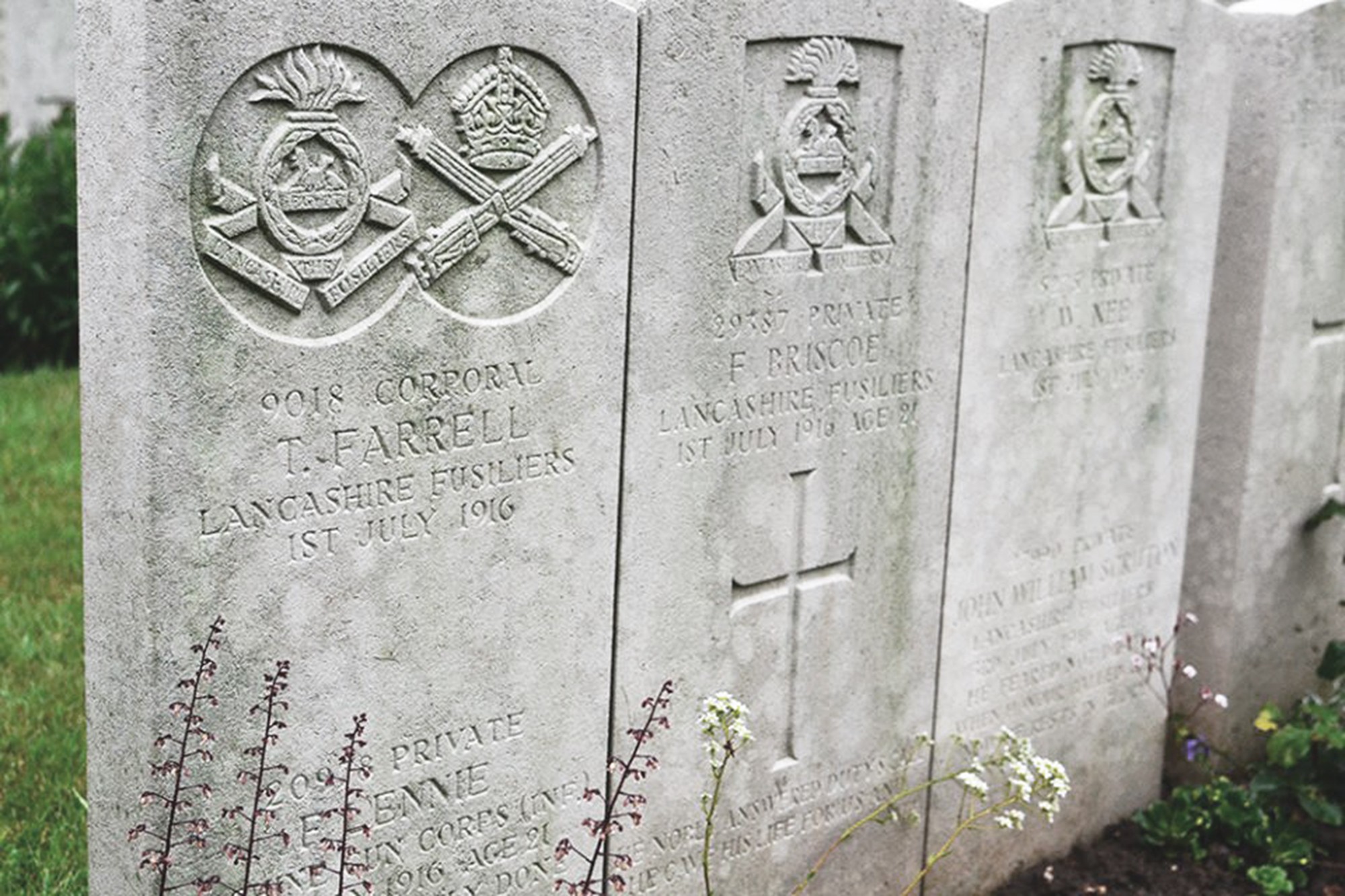