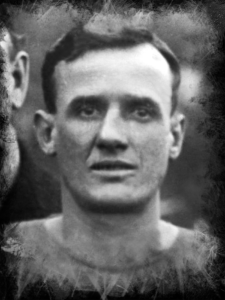 Walter Bettridge (1886-1931) was born in Oakthorpe, Leicestershire in October 1881 and died in Measham on 23 December 19131. An experienced full-back, Bettridge spent the majority of his career at Chelsea where he played more than 250 league and cup games in eight seasons. During the First World War, Bettridge joined the Royal Flying Corps before returning to Stamford Bridge following the Armistice. He died in 1931 aged just 45.

Bettridge began his football career at local amateur side Oakthorpe Albion before impressing in short spells Measham United, Worksop Town and Burton United. In 1909, Bettridge joined first division outfit Chelsea and would make his senior debut on 16 October 1909 in a 1-0 defeat to Blackburn Rovers and Ewood Park. He would then play a further 19 games during the 1909/10 season, firmly establishing himself as a first-team stalwart despite Chelsea being relegated after finishing in a lowly 19th position.

In his second season at Stamford Bridge, Bettridge played a total of 37 league and six cup games as Chelsea finished just outside the promotion places and reached the semi final of the FA Cup. Despite this disappointment, the following season saw the London club secure their return to the English top flight with Bettridge making a total of 28 appearances. Over the next three seasons, Bettridge played 84 matches in all competitions and was part of the Chelsea side that lost the 1915 FA Cup Final 3-0 to Sheffield United. He would then make a number of unofficial appearances for the club during World War One before undertaking military service in 1916.

Following the Armistice, Bettridge returned to Stamford Bridge and would play a further 69 league and 11 FA Cup games in two seasons before finally leaving Chelsea in November 1922 to join Gillingham. His stayat Priestfield was to prove short-lived, however, and after making just 19 appearances for the Third Division South side Bettridge called time on his playing career.

Air Mechanic 19696 Bettridge joined the Royal Flying Corps on 29 January 1916 and trained as a fitter. He was subsequently posted to the Southern Aeroplane Repair Depot (SARD) at Jersey Brow Royal Aircraft Factory, Farnborough, where he served alongside a number of other professional footballers including Chelsea teammates Harry Ford and Charlie Freeman. After earning promotion to the rank of air mechanic 2nd class soon after his arrival at SARD, Bettridge was promoted to air mechanic 1st class on 1 September 1916 – a rank he held for the duration of the war.

When the Royal Flying Corps merged with the Royal Naval Air Service to form the Royal Air Force on 1 April 1918, Bettridge was remustered to the trade of fitter in the mechanical transport (MT) section at SARD and would subsequently remain at Farnborough until his demobilisation in 1919.