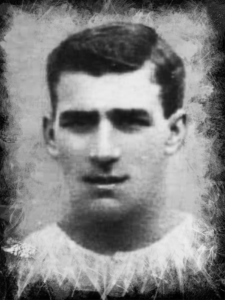 Henry Thomas Ford (1893-1960) was born in 1893 in Fulham, west London and died in 1963. A pacy winger blessed with good control, Ford played almost 250 games for Chelsea either side of World War One during which he served with the Royal Flying Corps/Royal Air Force.

Ford began his football career at amateur side Tunbridge Wells Rangers before joining Chelsea after impressing in a match against their second XI. After signing professional terms in April 1912, he was handed his senior debut on 7 September in a 1-0 defeat at Bolton Wanderers. Despite this  losing start , Ford impressed sufficiently to become an integral part of the Chelsea side and had racked up 32 appearances and nine goals by the end of his first season at the club.

The 1913/14 campaign proved to be the most productive of Ford’s career and he played all-but one league game as Chelsea finished in 8th position. Now firmly established at the club, the 1914/15 season saw Ford score three times in 33 league matches and two in Chelsea’s run to the FA Cup Final, when he played in the 3-0 loss to Sheffield United at Old Trafford.

After the First World War, Ford returned to Stamford Bridge and went on to make another 132 appearances in five seasons. He also scored 23 goals. His final game came on 10 November 1923, ironically against the side he had made his Chelsea debut against, Bolton Wanderers.

Air Mechanic 24211 Ford joined the Royal Flying Corps (RFC) on 29 February 1916 and trained as a rigger. He was then posted the No.1 (Southern) Aircraft Repair Depot (SARD) at Jersey Brow Royal Aircraft Factory, Farnborough. A number of other professional footballers were based at SARD, including Chelsea teammates Walter Bettrdige and Charlie Freeman, and Ford was part of a strong and successful RFC football team that was active throughout the First World War. Having been remustered to the Royal Air Force (RAF) when the RFC amalgamated with the Royal Naval Air Service (RNAS) on 1 April 1918, Ford was finally discharged and transferred to the RAF Reserve on 5 March 1919.