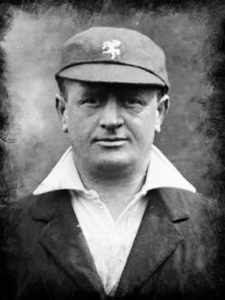 Harold Thomas William “Wally” Hardinge (1886-1965) was born on 25 February 1886 in Greenwich, Kent and died in Cambridge on 8 May 1965. A hugely-talented sportsman, Hardinge played more than 30 seasons of first-class county cricket and over 200 matches for three clubs in the Football League.  He was also capped by his country at both cricket and football. During the First World War, Hardinge served in the Royal Navy Air Service/Royal Air Force and would later coach the reserve side at Tottenham Hotspur. He died in 1965 aged 79.

Hardinge began his football career as a inside-forward at local amateur sides Eltham, Tonbridge and Maidstone United before moving to Newcastle United in May 1905. Despite making nine appearances during the 1905/06 season, Hardinge featured mainly in the reserve team at St. James’ Park and eventually left the club to join Sheffield United in 1907 for a fee of £350.  Handed his debut in a 2-0 home win over Preston North End on 7 December 1907, Hardinge went on to play 152 games in six seasons at Bramall Lane, scoring 46 goals. He would also win the only international cap of his career during his time in Sheffield, playing in England’s match against Scotland in 1910.

In the summer of 1913, Hardinge left United and moved to the English capital to sign for Arsenal, then in the Second Division. After making his debut on 6 September in a 2-1 home victory over Leicester Fosse, Hardinge quickly established himself in the side and would make a total of  30 appearances during his first season at the Gunners, scoring on four occasions.  He would then score seven goals in 12 games for Arsenal during the first half of the 1914/15 season, before choosing to put his career on hold to join the Royal Naval Air Service (RNAS). After returning to Highbury in 1919, Hardinge played a further 13 games before calling time on his football career to focus solely on cricket.

A right-handed opening batsman and slow left-hand spinner, Hardinge scored 33,519 runs and 75 centuries in 623 first-class matches for Kent, while also taking 371 wickets at an average of 26.48. Capped once by England, Hardinge was named Wisden Cricketer of the Year in 1915 before finally retiring from the game in 1933.

Air Mechanic 3rd Class 204267 Hardinge joined the Royal Navy on 27 April 1915 and was initially posted to the Royal Naval Armoured Car Division (RNACD). The Division was disbanded four months later when the army took control of armoured cars, passing them to the Motor Branch of the Machine Gun Corps (MGC). Hardinge, who by then had been promoted to the rank of air mechanic 2nd class, would subsequently work as a storeman at Royal Naval Air Service (RNAS) bases in Crystal Palace and Blandford before the service was merged with the Royal Flying Corps (RFC) on 1 April 1918 to form the Royal Air Force (RAF). Re-classified to clerk 2nd class, Hardinge was later posted to RAF Cadet Brigade HQ in Hastings before being transferred to the RAF Reserve on 25 February 1919.  He was finally discharged on 30 April 1920.