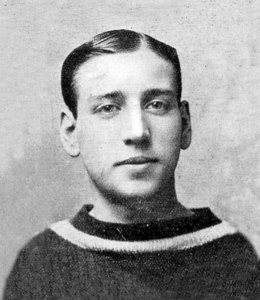 William Pickering (1894-1917) was born in Glasgow in 1894 and died in Mesopotamia (now Iraq) on 9 November 1917. A promising centre-forward, Pickering played for Burnley and Scottish side Morton before enlisting in the British Army during World War One. He would subsequently serve in the Middle East, where he would lose his life aged 24.

Pickering joined Burnley from Scottish junior football in 1912 and scored on his debut in a 5-2 win over Liverpool at Turf Moor on 14 March 1913. As understudy to first-choice forward Bert Freeman, Pickering would play just won further two league games during the 1913/14 season and was not part of the side that beat Liverpool 1-0 in the FA Cup Final on 25 April.

The 1914/15 season proved more productive for Pickering and after playing his first game of the campaign against Manchester United on 14 November 1914, he would go on to score five goals in 10 league and one FA Cup appearances. He was also part of the Burnley side that won the Lancashire Senior Cup. Following the suspension of official competition in England, Pickering left the Clarets and returned to Scotland where he played five games for Morton during the 1915/16 season, scoring four times.

Private S/12434 Pickering enlisted in the 1st Battalion of the Seaforth Highlanders after returning to Scotland in 1915 and would subsequently serve with the unit in Mesopotamia (now Iraq). The battalion would see heavy action during its time in the Middle East and took part in the battles at the Sheikh Sa’ad, Wadi, Hanna, Dujailia, Sannaiyat, The fall of Kut, and The capture of Baghdad.

On 5 November 1917, the battalion was involved in the the Battle of Tikrit, which would prove to be one of the final significant engagements fought on the Mesopotamian Front. Pickering would die four days later, aged 24-years-old. The Burnley Express published a letter from Pickering’s mother to Burnley FC secretary, J. Howarth, on 1 December 1917, which read: “I am sorry to inform you that you centre-forward Wm. Pickering fell in action on the 9th November in Mesopotamia. He was shot through the head whilst serving with the Seaforth Highlanders. Will you kindly let his club-mates and companions know of his death?”

Pickering was later buried at Baghdad (North Gate) War Cemetery, which was first used in April 1917 before being enlarged following the Armistice. Today there are 4160 Commonwealth casualties from World War One commemorated in the cemetery and 2729 unidentified burials.