THE STORY OF CLAPTON ORIENT IN THE FIRST WORLD WAR 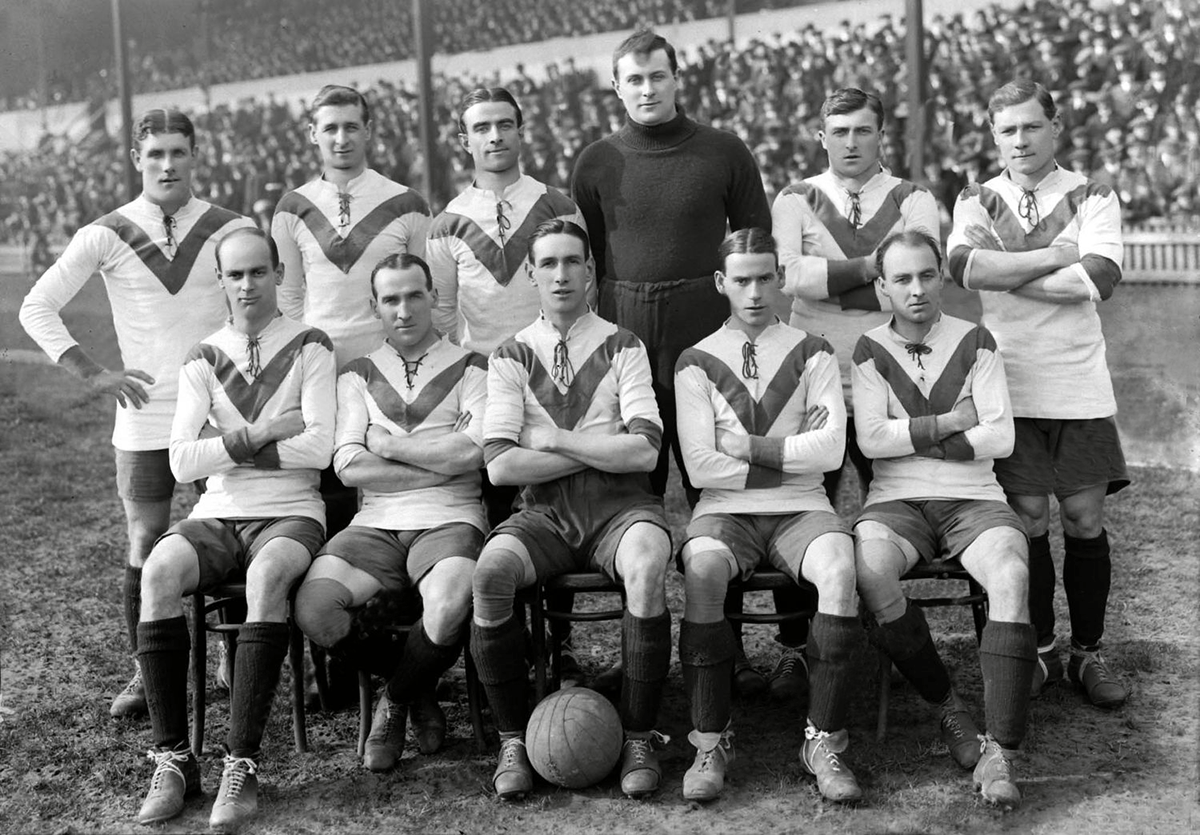 A recruiting meeting was organised by the FA and the War Office at Fulham Town Hall, Harwood Road, almost five months into World War One, with a view to raising a which would specifically comprise of footballers, club officials and supporters – the 17th Battalion Middlesex Regiment (1st Football) which was to become more commonly known as the Footballers’ Battalion.

Initially only the foyer and small hall was made available for the meeting on Tuesday 15 December 1914. However, so many people attended that the doors for the main hall were opened to let the large crowd in. Sitting at the far end of the hall and up on the stage were the following dignitaries: Mr W Joynson-Hicks MP (Chairman), Mr HG Norris (Mayor of Fulham), Right Hon W Hayes-Fisher PC MP (President of Fulham FC), Right Hon Lord Kinnaird KT (President of the Football Association), Col Grantham, Capt Whiffen, Capt Wells-Holland (Clapton Orient FC), Messrs JB Skeggs (Millwall) and FJ Wall (Hon Secretary).

The hall was packed to the hilt and the atmosphere was electric. The Chairman opened proceedings with an excellent speech which was then followed by passionate and patriotic declarations, along with words of encouragement from several others sat with him on the stage, all met by enthusiastic applause – and, due to the excitement and at the appropriate time, laughter. There was of course moments of intense seriousness when the reason for convening the meeting in the first place was underlined and what the potential consequences would be of volunteering to join up to serve in the Army in a time of war.

Following the completion of the speeches it then came the time for those who wished to join up to come forward and onto the stage. Included in the first group that signed up into the 17th Middlesex was Fred ‘Spider’ Parker the wing half and captain of Clapton Orient Football Club, Frank Buckley of Bradford City and Archie Needham of Brighton and Hove Albion. Spider was soon followed by nine of his Orient team mates including ‘keeper Jimmy Hugall and ace striker Richard McFadden. Croydon Common also responded well with six players and Brighton with a further three. However, despite the huge number in attendance only thirty -five signed on the dotted line.

Further recruiting meetings were held around the country with a view to establishing the Footballers’ Battalion. In the meantime Clapton Orient’s chairman, Captain Henry Wells-Holland wasted little time in encouraging his staff to join the initial ten O’s players that had signed up at Fulham Town Hall. Due to his military background having served in the Territorial Army, it had always been Wells-Holland’s intention right from the start of the war to form a platoon made up entirely of Orient footballers and now he had the opportunity to put his plan into action.

Wells-Holland was aided by the experienced and influential midfielder Robert Dalrymple who had previously played for Heart of Midlothian, a club that had also joined up in large numbers. Between them they encouraged the remaining members of the Clapton Orient squad and officials to ‘do their bit’. The O’s were the first English football club to join up en masse with a total of forty-one players, staff and supporters joining up to serve King and Country.

Meanwhile, whilst the plans for military involvement were being put in place, Clapton Orient, along with the rest of the football family carried on until the end of the 1914/15 season with the O’s last game being at home to Leicester Fosse on 24th April 1915. In front of a packed house of over 20,000 spectators, not only did the Orient win the game 2-0, but straight after the match the ten players who had joined up at the recruiting meeting at Fulham Town Hall, got into uniform and (probably still profusely sweating) marched around the pitch with other members of the Footballers’ Battalion, in a farewell parade before going off to their training camp in preparation for their time in France. 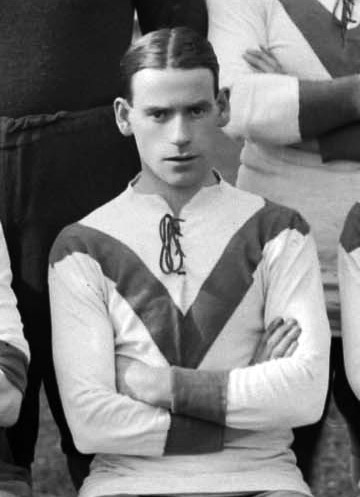 The 17th Middlesex subsequently established itself in northern France with the rest of the British Army with plans for a major offensive to break through the German line that stretched from the North Sea right down to the Swiss border.

The Clapton Orient contingent – like their comrades from other clubs, were really in the thick of it during the battle. Although they were not involved in the opening weeks or so they saw heavy action during the fighting in Delville Wood or ‘Devils Wood’ as it was to be known.

The O’s were to lose three of their players during the Battle of the Somme – Private William Jonas, a fine centre-forward who was killed in Delville Wood, Private George Scott, a man mountain of a defender who died of his wounds in a German military hospital in Le Cateau, and finally ace goal scorer Richard McFadden (right) who was mortally wounded near Serre.

McFadden was a hero – both in his civil life as well as during his military service. Before the war it was known that he had saved a man from a burning building and then whilst on a training run along the River Lea near to the Orient’s ground in east London, he saved a young boy who was drowning by jumping in to rescue him. His life saving exploits continued in northern France when he would go out into No-man’s land to rescue wounded comrades. McFadden was awarded the Military Medal for his bravery and was subsequently in line for a commission as a warrant officer before he lost his life.

William Jonas was the ‘David Beckham’ of the time, a skilful centre-forward who linked up well with his best friend Richard McFadden. Jonas received a large number of letters from the female supporters at the O’s, up to fifty a week and things got so bad he had to put a letter in the Clapton Orient programme to say that whilst he was flattered by the attention shown towards him by the ladies of Clapton could the letters please stop as he was a happily married man. McFadden witnessed the death of his pal and sent the following letter back to the Orient giving his eye-witness account:

I, Richard McFadden sadly report the death of my friend and O’s colleague William Jonas on the morning of 27th July, age 26. Both Willie and I were trapped in a trench near the front in Somme, France. Willie turned to me and said “Goodbye Mac”, Best of luck, special love to my sweetheart Mary Jane and best regards to the lads at Orient’. Before I could reply to him he was up and over. No sooner had he jumped up out of the trench, my best friend of nearly twenty years was killed before my eyes. Words cannot express my feelings at this time.

Some would say that the Orient were fortunate to only lose three of its number out of the forty-one that joined up, and indeed there were other clubs that did lose more players. However, many of the Orient players that saw action sustained serious wounds, including the O’s ‘keeper Jimmy Hugall who was wounded three times – including an injury to his eye, and yet after the war he was able to resume his professional football career.

Clapton Orient’s service and sacrifice during World War One is just one example of how Britain responded at a time of great need – they took the lead just as Heart of Midlothian did in Scotland. Leyton Orient supporters are extremely proud of the major contribution made by Clapton Orient to the Footballers’ Battalion. Four trips to the Somme have now been undertaken with over 1,000 people travelling over to pay their respects on the battlefields of the Great War.

In June 2014, family descendants of William Jonas, Richard McFadden and George Scott travelled with a group to meet up at their ancestor’s graves and memorials. This was the first time all three families had been together since the horrors of 1916. On the previous trip in 2011, the unveiling took place of the O’s Somme memorial in the village of Flers in northern France.

On 24 October 2021, a second memorial to honour the wartime service and sacrifice of the players, staff, club officials and supporters of Clapton Orient was officially unveiled at the National Memorial Arboretum in Staffordshire. Based on the original memorial in Flers, it is the first to commemorate a football club at the site and was made possible by fund-raising initiatives and generous donations by Leyton Orient supporters and fans of other clubs, as well as the general public and with the dedication, commitment and hard work of the O’s Somme Memorial Fund Committee.

WE WILL REMEMBER THEM

Steve Jenkins is author of They Took The Lead: The Story of Clapton Orient in the Great War

© Copyright Steve Jenkins. All rights Reserved. Not to be reproduced. 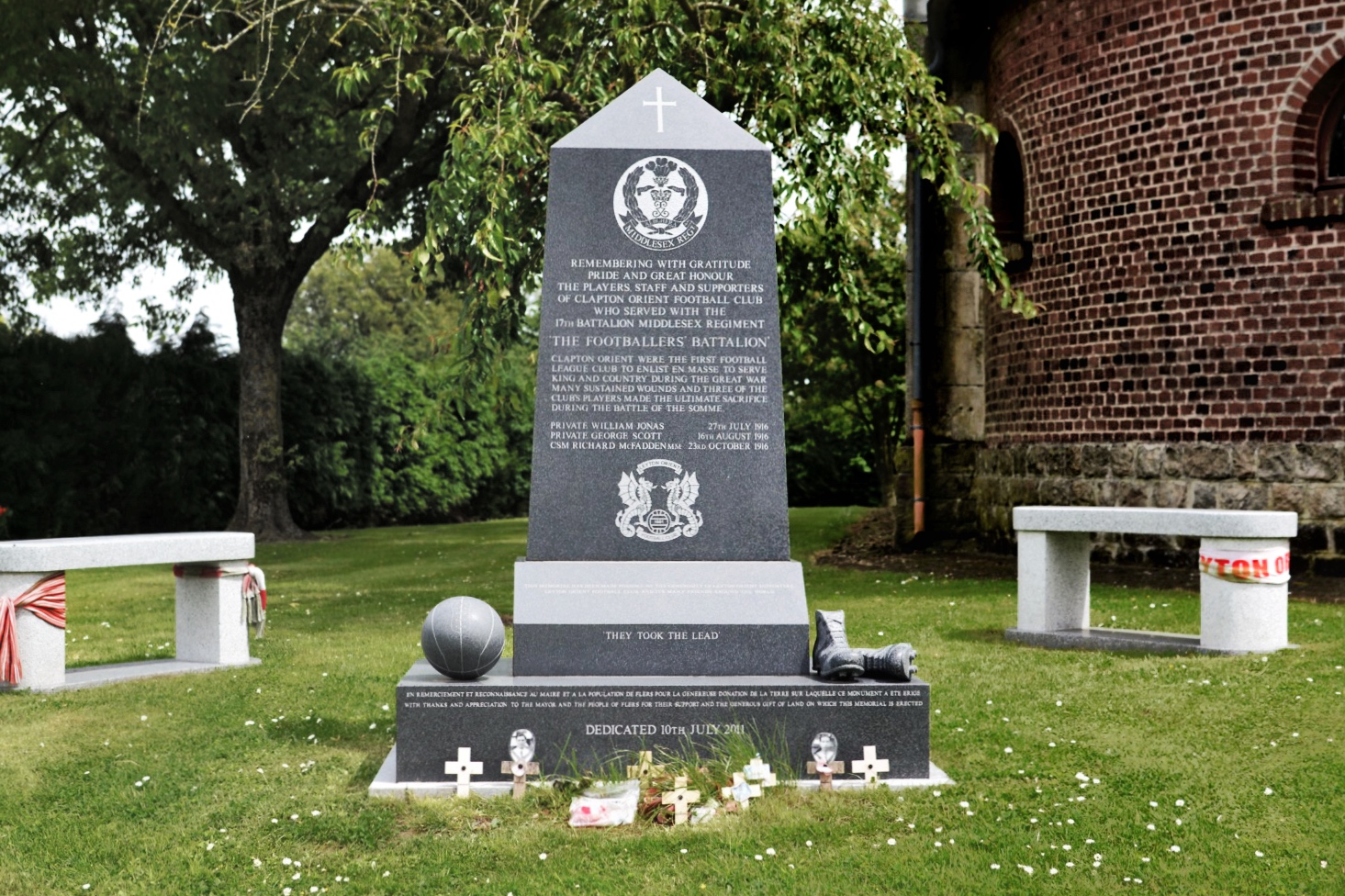