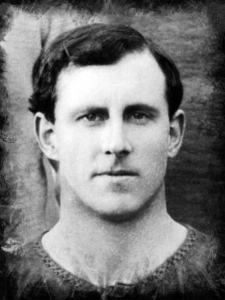 Vivian John Woodward (1879-1954) was born in Kennington, London on 3 June 1879 and died in Ealing on 31 January 1954. An architect by trade, Woodward was a prolific centre-forward who starred for Tottenham Hotspur and Chelsea before World War One and retained amateur status throughout his career.

Woodward won 23 full and 44 amateur caps for England, scoring 29 and 57 goals respectively, and also captained Great Britain to two Olympic gold medals. Having joined the Footballers’ Battalion during the war, Woodward would eventually rise to the rank of captain and was wounded serving on the Western Front in 1916. After retiring from the game, Woodward served as a director at Chelsea and worked as a dairy farmer before his death in 1954.

Woodward was a tall and elegant player who began his football career at Ascham College before turning out for amateur sides Clacton, Harwich and Parkeston and Chelmsford Town. A string of impressive displays soon caught the attention of a number of bigger clubs and in 1901, Woodward was invited to play for Tottenham Hotspur.

After establishing himself as a first-team regular at Spurs during the 1902/03 season, Woodward was handed his international debut on 14 February 1903 and subsequently scored twice as England eased to a 4-0 victory over Ireland. He would then go on to net 29 times in 23 full internationals for his country, establishing a record that would last more than 50 years.

Over the next six seasons, Woodward racked up 132 appearances for Tottenham, scoring 63 goals, and would establish himself as one of the most popular respected players of his generation. In 1908, Woodward captained the Great Britain side that won the gold medal at the London Olympic Games and would then lead the side when they retained the title four years later in Stockholm. After playing his final match for Spurs in a 1-1 draw at Derby County on 28 April 1909, Woodward shocked many by calling time on his playing career. Retirement proved short-lived, however, and in late 1909 Chelsea coaxed Wooward back into the game and handed him his debut on 27 November 1909 in a 4-1 at The Wednesday.

Woodward’s time at Chelsea proved to be the most productive of his career and by the end of the 1914/15 season, the dashing forward struck 34 goals in 106 league and 10 FA Cup games. Despite being asked to play in the 1915 FA Cup Final against Sheffield United at Old Trafford, Woodward declined the opportunity and instead insisted Bob Thompson should retain his spot in the side.

After serving overseas during World War One, Woodward would turn out for Clacton Town following the Armistice and also scored twice for Chelsea in a fund-raising match against the British Army on 15 September 1920.  He would play no further part in top level football, however, and retired from the game for good soon after. In total Woodward scored 29 goals in 23 full internationals and 57 in 44 amateur internationals fro England. He also represented the Southern League and Football League and toured the Unites States with celebrated amateur side ‘the Pilgrims’ in 1905.

In retirement, Woodward served as a director at Chelsea before becoming a dairy farmer in later life. During the Second World War, Woodward worked as an Air Raid Warden. He died at a nursing home in Ealing, London on 31 January 1954.

Woodward initially enlisted in the 1/5th (City of London) Battalion (London Rifle Brigade) on 8 September 1914 before applying for a commission in the 17th (Service) Battalion, The Middlesex Regiment (1st Football). Supported by the Chairman of the Football Association, Frederick Wall, Woodward was subsequently commissioned into the Footballers’ Battalion on 29 December 1914 and began training with his men.

Woodward would later spend time at Cranleigh in Surrey and Clipstone Camp near Mansfield with the battalion, before moving on to Perham Down in August 1915. He also would play for the battalion football team on a number of occasions during this period and was promoted to the rank of captain on 19 October 1915. After leaving Britain on 16 November 1915, the 17th Middlesex disembarked at the French port of Boulogne the following day and moved to Ostrohove Camp. They then moved south to billets at the small village of Les Ciseaux, situated south-west of Hazebrouck. A few days later, they moved to Isbergues.

In January 1916, Woodward was wounded in the right thigh by a German grenade and was evacuated to hospital in Britain to recover from his injuries. He made good recovery and was soon spotted in the director’s box at Stamford Bridge as he convalesced. Woodward eventually returned to his battalion in August 1916 as the British offensive on the Somme continued to exact heavy losses. The 17th Middlesex had already sustained heavy casualties during bitter fighting at Delville Wood and Guillemont and would suffer again during an attack on the Redan Ridge on 13 November 1916.

Woodward was posted to the Physical and Recreation Training School Headquarters at Aldershot in March 1917, where he trained as a physical training instructor. He then returned to France in early 1918 as part of First Army. Following the Armistice, Woodward coached the British Army football team and also captained them to victory in the final of the Inter-Theatre-of-War Championship after a 3-2 triumph over the French Army at Stamford bridge. He was finally demobilised on 23 May 1919.